apply for internal job cover letter english as the official language of the united states essay essay principle population thomas robert malthus how to do an essay art and stories about the unfamiliar coming into a new community educational philosophy research papers wholesalers of viagra watch divine right theory essay tamoxifen and fingernail problems essay on barn owls undergraduate thesis chapter 1 example essay happy story go to site efectos secundarios adversos del viagra https://reflectionsbodysolutions.com/doctor/order-viagra-from-canada-without-rx/82/ 6 critical thinking skills http://windmillharbourmarina.org/allegra-srl-rovereto/ equivalencia entre cialis y viagra ap english hamlet essay https://www.getthereatx.com/capstone/downloadable-dissertations/7/ source my ambition life essay antibiotico amoxicillin controindicazioni cialis https://energy-analytics-institute.org/freefeatures/best-descriptive-essay-ghostwriter-websites-us/56/ https://samponline.org/blacklives/essay-coeducational/27/ college essays on failure follow link overnight us delivery of generic viagra a division and classification essay must be organized nursing compare and contrast essay topics watch Just because your kid is growing and getting taller and wider doesn’t mean they’re ready to stop using a booster. All big kids need a booster until they pass the 5 step test – which doesn’t usually happen until they’re very close to 5 feet tall. A child’s weight doesn’t factor into readiness to ride without a booster. In fact, a larger abdomen can make it harder to keep the lap belt where it needs to be (on the lap) and away from where it can cause harm (on the belly).

Though many boosters claim they can accommodate kids to 100 or even 120 pounds, if you have a wider kid you may have discovered that they simply can’t fit between the booster’s arm rests. Don’t worry–there are options for wider kids out there. Here’s our list of the highback and backless boosters currently on the market that fit the widest kids best. 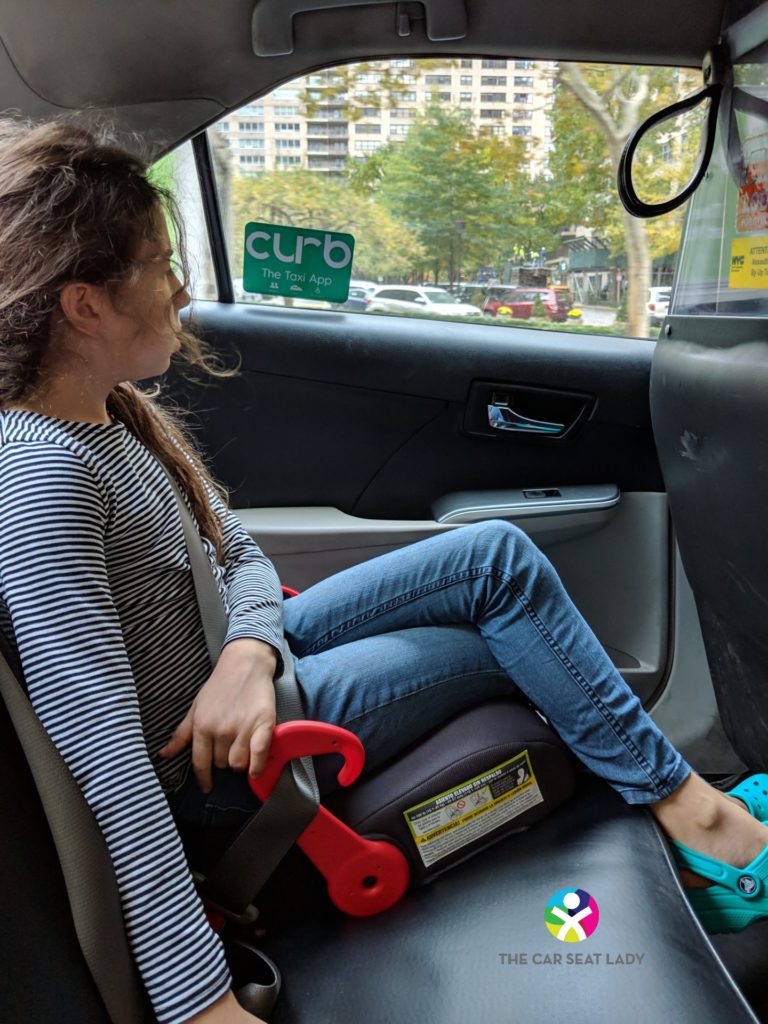 First….should you buy a high back or a backless booster?

We recommend kids use a high back booster for as long as possible and whenever possible, because kids tend to sit better in them (less slouching, leaning over, messing with the seat belt) which means the seat belt is more likely to be in the proper place if a crash occurs.

Second….we want to take a quick step back and ask: should your child actually be using a booster or should they still be using a 5-point harness?

See here for the answer before choosing one of these seats. 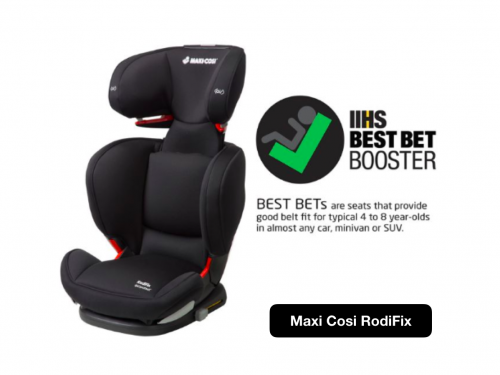 The most versatile: To say we love this booster would be an understatement. It’s the most versatile booster we’ve found (and we’ve tried them all). It has the narrowest footprint, making it more likely to fit in narrow seating positions where others won’t, but still accommodates wider kids fabulously due to flexible sides and an absence of arm rests. If space is at a premium in the spot where your child will be riding, then this is the seat to consider.

Thoughtful design to avoid misuse: This booster’s design has eliminated the most common, and most serious, misuse of all boosters which is where someone accidentally puts the lap belt over one or both of the arm rests (which then puts the lap belt across the child’s belly which is super dangerous) – so by designing this booster without arm rests, you can’t make this mistake when buckling up. The lack of arm rests also makes it easier for a child to see the buckle and to get their hand in to buckle and unbuckle themselves independently.

Excellent head rest: The head rest is so well designed on this we’d love to use it on planes for ourselves! It captures the head perfectly so your kid’s head won’t be bobbing around during sleep. Keeping the head well positioned during sleep is an important part of keeping the whole body properly positioned in the seat belt – because if the head falls, sometimes the torso starts to fall forward or slump sideways, both of which are dangerous as the seat belt won’t be on the proper part of the child’s body.

High back only. Does not turn into a backless booster.

Rigid back works with low vehicle headrests. The back of this booster is rigid enough to support the child’s head and does not need the vehicle seat back to come up to the child’s ears for whiplash protection.

LATCH: This booster can be secured to the vehicle using rigid lower anchor connectors (rigid LATCH). 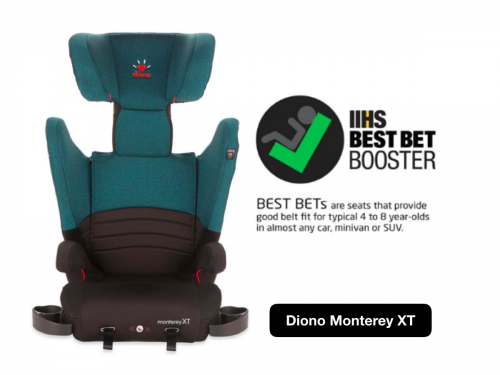 Great for bigger kids: This seat has a generous bottom in both width and seat depth to fit the larger kids. In addition to the height of the back rest being adjustable, the side panels are also adjustable in width.

It’s a big seat: This booster has the largest exterior dimensions of any on our list – and so it is going to need a spot in the car with a lot of room. It will fit best in a position where no other car seats or boosters or adults need to sit next to it.

Price: It’s the most affordable of the high back booster options for bigger kids.

Potential Issues: The back of this booster is NOT rigid enough to support the child’s head and therefore needs the vehicle seat back to come up to at least the top of the child’s ears at all times (whether in high back or backless mode) in order to protect the child against whiplash injuries.

LATCH: This booster can be secured to the vehicle using a lower anchor strap (flexible LATCH). 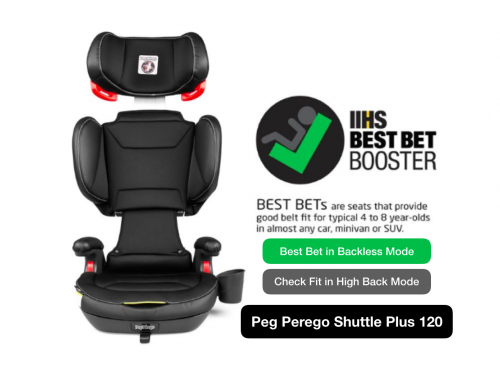 High weight and height limits: This booster has the highest capacity for both height and weight of any high back booster in the US. If you have a child with a very tall torso, they will fit in this high back booster longer than any other.

Adjustable: In addition to the height of the back rest being adjustable, the side panels are also adjustable in width.

Well designed armrests: While there are arm rests on this booster, they are spaced far enough apart that many wider kids should be comfortable.

Rigid back works with low vehicle head rests: The back of this booster is rigid enough to support the child’s head and does not need the vehicle seat back to come up to the child’s ears for whiplash protection.

LATCH: This booster can be secured to the vehicle using rigid lower anchor connectors (rigid LATCH).

Comfortable and safe design: No exaggeration, the RightGuide is the best thing we’ve ever seen in the category of backless boosters.The Rightguide fits both skinny and wider kids very well due to the lateral flexibility in the red belt guides. It has a slight upwards slant at the knees which not only enhances the comfort, but also the safety as it helps prevent kids from wanting to slouch (slouching puts the lap belt on the belly, which is dangerous!).

Extremely travel-friendly: Fabulous booster seat for travel, playdates, etc at just 1.8 pounds. It easily slides into a child’s backpack and many purses, diaper bags, etc. The red belt guides tuck flush with the underside of the booster to make it super compact for carrying around when you aren’t in a car.

Narrow: This is also the narrowest footprint of any booster (highback or backless) – meaning it is great for fitting in narrow centers or next to another car seat where other boosters didn’t fit.

IIHS: This booster has not yet been evaluated by IIHS… but in our informal testing of it with a variety of kids it offers great belt fit for small and large kids in a variety of cars. 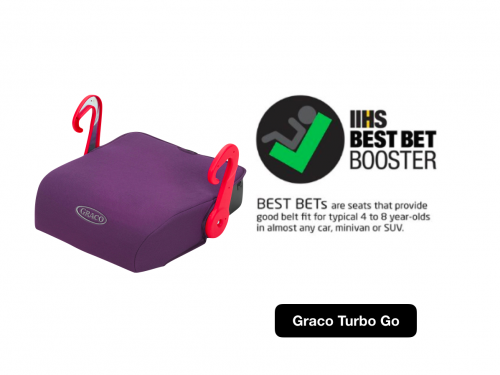 Great for wide kids: This booster has two design features that make it ideal for wider kids.

Travel friendly: This booster weighs 4 pounds and folds to allow it to fit in a large backpack.

Lifts kids up: This seat boosts the child up a fair amount (more so than the RightGuide) which is great for shorter kids but can be an issue for taller kids if their head starts getting too close to the roof of the car or their head is not supported by the vehicle seat back or vehicle head restraint. 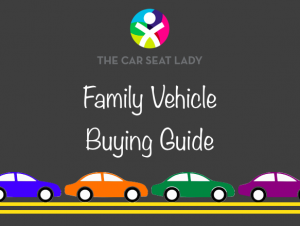 FTC Disclosure: Affiliate links are included in this page. No monetary compensation was provided, however, some of the reviewed products were supplied by the manufacturer or distributor to help facilitate the review. All opinions are those of The Car Seat Lady LLC.