What are seat belt pretensioners and force limiters, and why should we care about them?

These are devices built into the seat belt that help the seat belt work better. Pretensioners (PT) immediately tighten your seat belt the instant a crash occurs, allowing the seat belt to better restrain you and limit how far you move in a crash. Force limiters (FL) let a controlled amount of slack into your seat belt later on in the crash, to prevent the seat belt from holding you so tightly that it causes chest injuries like rib fractures.

Pretensioners lower the risk of death by 12.8% compared to seat belts without pretensioners for those riding in the front seat of a car, compact SUVs, or minivans. This is why many vehicle owners’ manuals explain that pretensioners are there “for added protection.” Pretensioners and force-limiters are key safety features in frontal crashes. They decrease how far your body moves forward and how much force is applied to the chest. The most challenging crash type for a seat belt is a far-side impact, where your body is thrown to the opposite side of the car, and pretensioners are critical in helping the shoulder belt stay on the shoulder during far-side crashes.

Automakers have known for decades that pretensioners enhance safety. That’s why most vehicles have had pretensioners in the front seats for decades – and all cars, SUVs, and minivans in the US have since 2008 – even though NHTSA has never required it.

What’s the Evidence for Pretensioners?

This study looked at whether a seat belt pretensioner is beneficial to children (6y & 10y dummy) & small adults (5th% female) in run-off-road events, which cause the body to lurch sideways – in much the same way as the body does in a far-side side impact. The dummies were seated on the left side of the car, and as the vehicle ran off the road on the right hand side, the dummy moved to the right (you always move towards the impact). Each dummy was crash tested twice – once with and once without a seat belt pretensioner. The study found that the use of a seat belt pretensioner reduced how far the dummies leaned to the side because the shoulder belt remained on the shoulder, which allowed it to support the side of the lower torso. 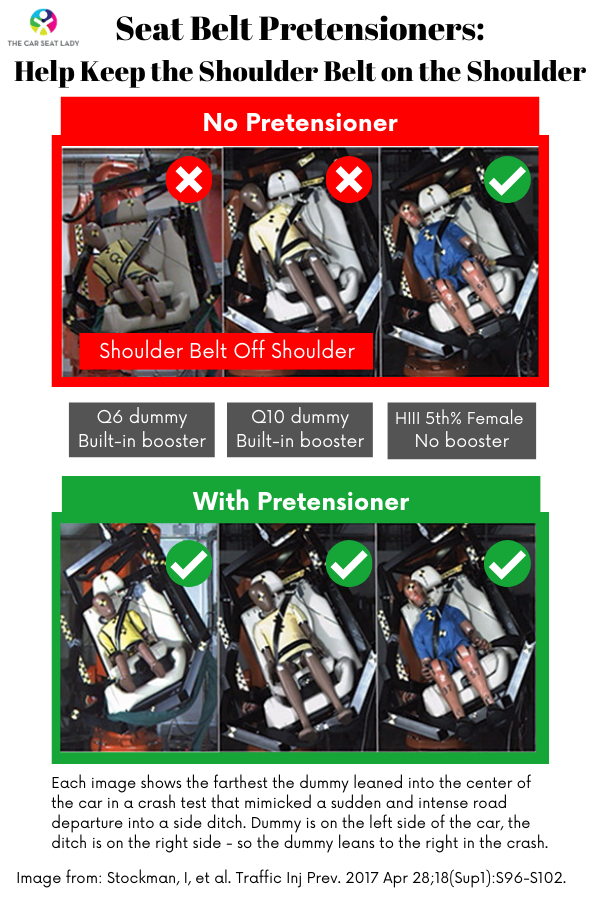 Does My Vehicle have PT + FL?

Every year, vehicle manufacturers voluntarily provide NHTSA with information on each of their vehicles for the New Car Assessment Program (NCAP). NHTSA publicly releases the non-confidential parts. We’ve compiled the data on PT + FL into the spreadsheets below, divided by vehicle model year.

A word of caution: Experts have advised us that this data set contains inconsistencies. We’ve nonetheless decided to share it – but strongly suggest double checking the vehicle owner’s manual and/or contacting the manufacturer’s customer service (not the dealership) to verify where this technology does or doesn’t exist in your vehicle.

We recommend viewing these tables on a computer – as they are not very mobile friendly.