First off, should your child even be forward-facing?

For over 20 years, the American Academy of Pediatrics (AAP) has recommended keeping kids rear-facing until they are too big for rear-facing in their convertible seat. They continue to advocate for this in their 2018 policy statement.

What does “too big” mean? See When Should Your Child Turn Forward-Facing to find out.

Many states now require by law that children be at least 24 months old to sit forward-facing.

The Car Seat Lady explains why rear-facing is safer in this 3 minute video:

If your child is truly ready for forward-facing:

Your child can ride in one of a few types of car seats:

Maximum height and weight: There are three ways a child typically outgrows a forward-facing car seat. Your child is too big for the car seat’s forward-facing 5-point harness mode as soon as they have exceeded ONE of the following limits:

If your child has exceeded the limit in ONE of these categories, they are too big for the car seat in forward-facing 5-point harness mode.

We recommend that children remain in a 5 point harness car seat until they are AT LEAST 40 pounds and about 5 to 6 years old.

Lower Anchor Weight Limit Restriction! Check your seat's instructions to make sure you can use LATCH to install it!

Most car seats require an installation with the vehicle seat belt and not the lower anchors (LATCH) once the child reaches a certain weight, which may be anywhere from 25 to 40 lbs (this depends on the seat). Check your manual to see which installation method is appropriate for your child’s weight. See our LATCH Weight Limits page for much more explanation regarding this issue.

How to Buckle Up

The straps should be adjusted so that they emerge from the back of the car seat right at or slightly above your child’s shoulders. 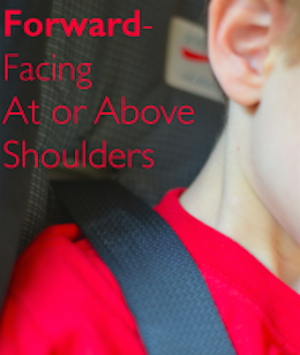 A note about the tether: ALWAYS ALWAYS use the tether!! Seriously! Here is a lot more info about what the tether does and why it’s so important.

Whether to use the seat belt or the lower anchors depends on the car seat’s preference, your vehicle’s design, and your child’s weight. In some cases one of the methods may be required and/or prohibited. ALWAYS check the manual to find out which installation method to use, especially if your child is over 35 to 40 lbs, since they will be affected by the car seat’s LATCH weight limits. 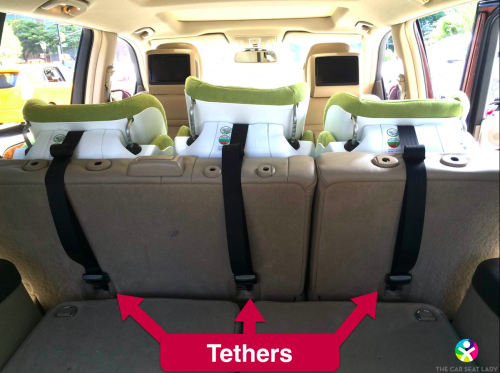 Why is it safer to use the tether?

Using the tether will decrease how far the child’s head will move in a crash by at least 4-6 inches typically. The less the head moves forward, the less likely it is to hit hard parts in your vehicle–like the door frame, the window, the back of the front seat, or even other passengers. The tether also reduces the amount of acceleration and how much force is applied to the neck during a crash.

In action: This video shows the same car seat with the same dummy in the same crash test… the only difference is that the seat in the foreground is using the tether strap, while the seat in the background is not. In a real car with a vehicle seat in front of you, you can easily imagine that the dummy in the background could hit his head on the back of the front seat or other hard structures because his head moves so much farther forward.

After a forward-facing car seat, the next step is a booster seat, assuming your child is over 40 lbs and at least 5 or 6 years old. For anything and everything booster related, check out our Boosters page.