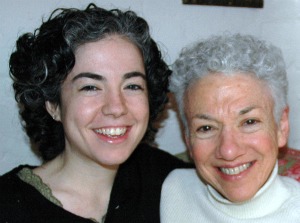 In spite of all our technology and sophistication car crashes are the leading cause of death and injury to children in the U.S.  Frustrated by this, Debbi became involved in what was then – the early 1980’s – a grassroots movement to raise public awareness about the availability and importance of car seats.

Debbi was instrumental in getting Maryland’s first car seat law passed in the early 80’s requiring children to ride in car safety seats. Her courses, both to those in the field and those outside – parents, doctors, nurses, police, firefighters, and more – educated thousands about the lifesaving potential of a car seat.  Almost 20 years ago she established a permanent fitting station on her driveway in Maryland –7 days a week, 365 days a year parents come (by appointment only) with their vehicles, car seats, and children to learn how to properly install the car seat and secure the child in the harness.

Debbi is a renowned national expert in the field of child passenger safety and has extensive experience helping children with special needs ride safely and securely in vehicles. She has appeared in countless local TV programs, radio spots, newspaper articles, and other media advocating for and educating about safe travel for children. Through her dedication and passion, Debbi has established herself as a fixture in the Baltimore community and is known affectionately as “the car seat lady.”

As a certified instructor for both the National Highway Traffic Safety Administration’s 4-day car seat course and a separate 2-day course on car seat safety for children with special needs, she has educated nurses, doctors, social workers, police, firemen, and many other community members so that they can provide information and services through their professional roles. Debbi and Alisa volunteered for two summers in children’s hospitals in Israel educating the staff about car seat safety for all children, including those with special needs.

In this video Debbi explains how she got started in child passenger safety and what keeps her involved 34 years later. 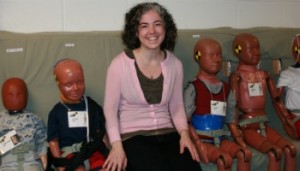 Alisa hanging out with some crash test dummies

While looking back it seems inevitable that Debbi’s oldest daughter, Alisa, would follow in her mother’s footsteps, as a young child becoming the “car seat lady” like her mother was the last thing Alisa envisioned. Having the “car seat lady” as your mom meant not being able to take a family walk without stopping at least once to let an unsuspecting parent know that their car seat was improperly installed – and then taking 20 minutes to help them fix the seat. It meant everyone at school knowing that you rode in a booster until you were 8 and a half (if you think few 8 year olds ride in boosters today, despite state laws requiring such, think about how few were in the late 1980’s). It meant flashing a two-sided sign at the unbelted motorist stopped next to you (as you slunk down embarrassedly in your seat, waiting for the red light to change to green) – one side asking them to “please buckle up”, the other side thanking them if they complied. It meant that your mother cared about others in a way that a young child can’t fully grasp.

Alisa’s earliest involvement was as a young teenager when she would come outside to entertain the children as her mother taught their now undistracted parents how to use their carseats. Required to do a month-long, 40 hour/week internship during her senior year of high-school, Alisa chose to work in the postpartum unit of a Baltimore hospital where she taught all the new parents how to properly install their car seats. After that experience, she “was bitten by the bug.”

When she moved to New York the fall of 1998 to begin her undergraduate work at Columbia University, she brought her expertise with her.  Since 1999 Alisa has run a fitting station in NYC; this unique opportunity allows her to impact the lives of many children as she has installed more than 15,000 car seats (and counting). Through her numerous media appearances – TV (MSNBC and FOX News), radio (1010WINS segment), print (The New York Times, The New Yorker, NY Daily News, NY Post, US Weekly), and websites – thousands of people nationwide are privy to this life-saving information. She also educates parents in the local community through lectures at new-mom groups, synagogue and church groups, and parents of twins clubs, to name a few.  Realizing that pediatricians are a trusted source of information to new parents, she also teaches pediatric residents the basics of car seat safety, so they can educate their own patients.

Alisa graduated from NYU School of Medicine in 2006, completed her pediatric residency at the Children’s Hospital of Philadelphia in 2009, and worked for 4 years in the NICU (Neonatal intensive care unit) at Columbia University Children’s Hospital of New York caring for babies with congenital heart disease before and after their first open heart surgery – all the while continuing her role as “the car seat lady”. In 2013 Alisa left practicing medicine to focus full-time on The Car Seat Lady.

The epidemiological research Alisa conducted on parental knowledge about and attitudes towards booster seats culminated in a publication in a professional journal in addition to a presentation at a national conference. As a certified instructor for the National Highway Traffic Safety Administration’s 4-day car seat course, she has educated nurses, doctors, social workers, police, firemen, and many other community members about car seat safety so that they can provide information and services through their professional roles. This website, dedicated to providing accurate, up-to-date information along with how-to videos to anyone worldwide is a dream of Alisa’s that has now come to fruition. 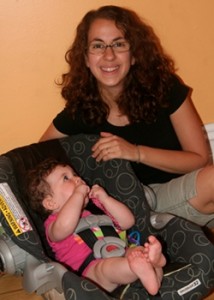 Emily never expected to become involved in the car seat world. Best friends with Alisa since elementary school, Emily was “tormented” by Debbi’s safety consciousness whenever she spent time with Alisa’s family (which was a lot). But Emily also got the benefit of being exposed to car seat safety from a very young age due to this friendship. Emily accompanied Debbi and Alisa to seat checks throughout her middle school and high school years. She finally stopped teasing Alisa about using a booster seat around the time Alisa got her driver’s license.

Emily and the Baer family parted ways when high school ended and Emily moved to Massachusetts to attend Wellesley College. After graduation, she moved to New York, renewed her friendship with Alisa and grew interested in Alisa’s fledgling business. When Alisa realized she would soon move away from New York, she knew she needed a replacement, and she trusted Emily to continue her work with the passion and dedication it requires. For nearly a year, Emily apprenticed with Alisa on weekends and weeknights after work. She had hundreds of hours of hands-on experience under Alisa’s careful instruction. In May 2006, Emily received her national certification as a Child Passenger Safety Technician and since then has continued to operate a fitting station on New York’s Upper West Side. Emily also has made numerous media appearances and educates new parents via lectures and group meetings. And Emily created and maintains thecarseatlady.com.

From 2006 until late 2009, Emily held a full time job at the Conference for Jewish Material Claims Against Germany and finished a Masters Degree at NYU while prioritizing another role for herself as the newest “Car Seat Lady.” In December 2009 she welcomed a baby girl into her family and in 2012 added a baby boy. Now Emily focuses on “just” being a mom and a Car Seat Lady. The responsibilities, joys and frustrations of motherhood have given Emily a new appreciation of the importance of outreach to new and newish parents.