This page has moved, please see Booster Science: How and Why Boosters Work to find out why kids can’t just use the seat belt.

Kids need to use boosters because the seat belt does not fit them correctly without the booster. If the seat belt doesn’t fit the child, he is at risk for injury; in fact a child between ages 4 and 8 riding in a booster is 59% less likely to be injured in a crash than a 4 to 8 year old wearing a safety belt alone. Read on to learn what seat belts do and why they don’t automatically work for kids.

What the seat belt does

In order to work properly, the safety belt needs to rest on the strong bones of the body – the collar bone (clavicle), chest bone (sternum), and hip bones (pelvis). Softer parts of the body – such as the belly (abdomen) – are not strong enough to withstand the extreme forces in a crash. It’s very important that the safety belt does not rest on these soft parts, since injuries may result. In order for the seat belt to work–to prevent you from being ejected and to distribute the crash forces–it needs to fit you like it fits the man in this picture. Unfortunately, seat belts do not fit kids under ages 10 to 12 this way.

The Problem with Safety Belts on Children

There are three main problems with vehicle safety belts and children. These three factors combine together in a crash to create an extremely unsafe situation which can only be corrected by the use of a booster. 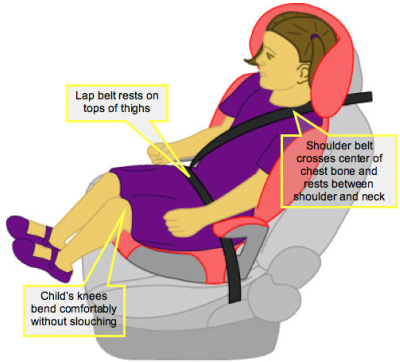 The vehicle seat is too deep for most kids to be able to sit comfortably without slouching – since their thigh bones (femurs) are too short. Slouching worsens the already poor belt fit by placing the lap belt further up on the abdomen and moving the shoulder belt even further off the chest and onto the neck. By creating a big gap between the child’s back and the back of the vehicle seat, slouching introduces a large amount of slack in the safety belt, which can allow a child’s head and body to move dangerously far forward in a crash.

A child’s pelvis (hip bones) is relatively small and cartilaginous and lacks the prominent anterior superior iliac spines of an adult’s. Try to feel your hip bone. What you’re touching is the anterior superior iliac spine–the part that sticks out the farthest. If you try to feel a child’s hip bones, it’s much more difficult (even though many kids are very skinny) because the iliac spine is not fully formed until about age 8-10. 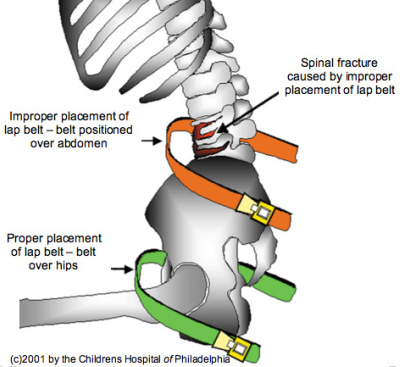