What to Avoid When Buying a New Car

Certain features in the backseat make installing car seats more difficult or at times, impossible. These problematic features most typically affect installation of 1 car seat in the center, 2 car seats side-by-side, or 3-across.

We’ve outlined a few of these issues to help you decide if the car you’re considering, or the one you currently have, is the right one for you.

Make sure the center of your vehicle’s back seat is big enough to fit a car seat! Why? 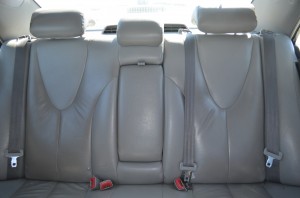 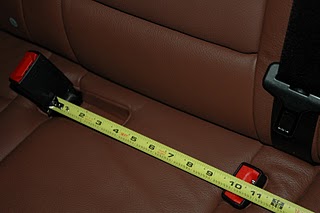 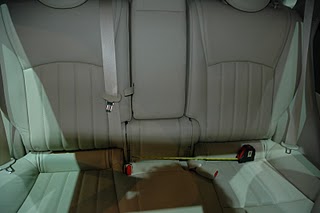 Center:
9 inches “wide” Note the dual hinges on either side of the center console. Car seats do not install well up against hinges like these. 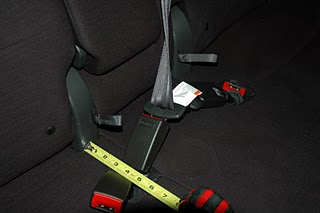 Center: 8 inches “wide”
Note that the seat belt buckle is 5 inches away from the seat bight (where the vehicle seat and back meet). This makes it especially difficult to install a car seat in this position (if you can find one that fits in such a tiny space) 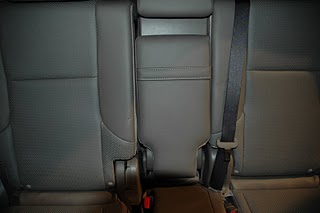 Center: about 6 inches “wide” (we didn’t measure it)
It hurts your bottom just thinking about sitting here! 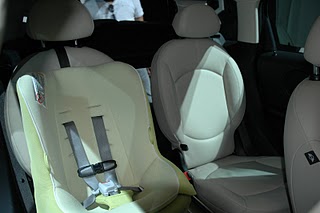 No middle seat at all!
Finally, a wise decision – if you don’t have room for a center seat, don’t tease us with 8 inches of a seat that is unusable for a car seat or a human body 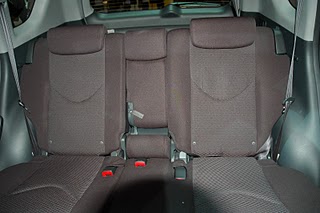 In order to install a car seat properly, you need to sink it down and back into the vehicle’s seat cushion. Rigid structures like metal hinges, and the plastic covers for them, prevent the car seat from sinking into the seat cushion, leaving you with a loosely installed car seat–and an unsafe child. This photo shows a 2010 Toyota RAV-4. Check out all the hinges in the center seat! 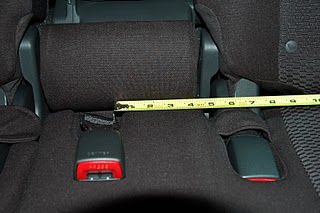 The RAV-4 is supposed to be a family car. But as you might suspect from this close-up of the center seat, it’s a disaster for car seat installation (and for an adult’s bottom too!!). The redesigned RAV-4 is just as problematic.

Car seat installation becomes even more difficult when you introduce a hump in the middle of these off center lower anchors. As you can see from the picture, the car seat tilts and achieving a tight installation is typically impossible.

Many boosters can be secured to the car using the lower anchors (LATCH). This is beneficial because it prevents the booster from becoming a projectile when the child is not in it. High back boosters with rigid LATCH may also better protect in a side impact; rigid LATCH prevents the lateral movement of the booster in a crash, which may keep the child’s body better contained in the booster’s protective shell. A booster by definition is a seat where the child uses the vehicle’s seat belt across them, like an adult. While some boosters are secured to the car using LATCH, this doesn’t change the fact that these are still boosters… which ALWAYS require the seat belt across the child’s body.  As you can see, in some vehicles the placement of the lower anchors is not compatible with the use of a booster with LATCH, because the booster will sit on top of the seat belt or buckle that the child needs to use. In this situation, the booster could not be secured with LATCH – and you would therefore need to buckle the booster whenever empty so that it would not become a projectile.

In the rare situation where you need to use LATCH and the seat belt when installing a car seat – currently required only by the Clek Foonf forward-facing with kids weighing more than 35 pounds – you would not be able to install the car seat in such a position.

Generally the foam under the center seat is flatter and more rigid than the foam under the side seats, which makes it harder to install a car seat in the center. Not only is the foam firmer under your bottom, it also tends to be firmer behind your back, and may include other rigid structures like an arm rest or cup holder. You’ll need more muscle to compress a flat, rigid seat cushion; this is one reason why it’s often difficult to install a car seat in the center position of many vehicles. 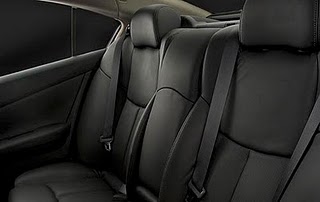 While most humps are on the bottom cushion of the vehicle seat, some are on the back cushion, which further pushes the car seat forward and prevents it from sinking into the vehicle’s seat cushion. Look at how the side humps protrude from the center of this 2010 Nissan Maxima! It would be difficult to install many car seats in this center position, and it also looks uncomfortable for an adult!

The “lumbar bolster” (our name for it) – will further push the car seat away from the back of the vehicle seat.

What does the head restraint do?  Why is it important?

A head restraint will protect your spine and neck during a crash. When a vehicle is struck from the rear and pushed forward, the vehicle seats push the occupants forward as well. Due to the physics of your body, your head will likely lag behind the movement of your torso, which causes your neck to bend back and stretch. This motion is commonly called whiplash, and while not life-threatening, whiplash can be quite painful and debilitating.

Neck injuries like whiplash are the most serious injury reported in 2 million insurance claims per year, which cost over $8.5 billion per year.  Neck injuries are the most common type reported in crashes and occur most often in rear end impacts.  Most rear end impacts occur in stop and go traffic in suburban and urban areas.  Women are especially at risk for whiplash, as they often drive in these conditions in vehicles with poor head restraint protection, like minivans.

How do I know if my head restraint will work? 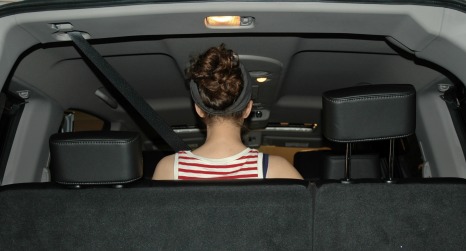 In this photo, Emily is at high risk for whiplash and other neck injuries due to the lack of a head restraint in her seating position–the center of the third row in a 2011 Nissan Armada.  In a crash, nothing would support her head.  Emily would be better protected in one of the side positions, since these have head restraints, but as is evident from the photo, in the highest setting the restraints come up barely past her ears.  A taller person–and most adults and many teens are taller than Emily, who is 5’3″–would not be safe even with the head restraint.