What are Inflatable Seat Belts?

Can I use an inflatable seat belt to install my child’s car seat?

For rear-facing, the Graco Extend2Fit 3-in-1 has the highest rear-facing LATCH capacity – and can be installed with the lower anchors until a rear-facing child is 45 pounds.

For forward-facing, the IMMI Go has the highest forward-facing LATCH capacity and can be installed with the lower anchors until a child is 55 pounds (kids will typically be too tall for the seat at or before 55 pounds).

If you have a Ford or Lincoln with an Inflatable Seat Belt (ISB):

If you need to install the car seat or booster with a seat belt, you’ll want to select from one of the car seat manufacturers below for your Ford/Lincoln.

City Go: May install carrier WITHOUT base using an ISB. Base may NOT be installed with ISB. Therefore, if you need to use the base, install the base with the lower anchors or move to a different position that doesn’t have an ISB.

City View: May install in harness or booster mode using ISB. However, do not run the ISB’s shoulder belt through the City View’s seat belt lock-off.

Note that the Click Tight convertibles (Marathon/Boulevard/Advocate Click Tight) and the BSafe35 and BSafe35 Elite & Endeavours infant seats can NOT be installed with an inflatable seat belt.

As of October 2016 – STOPPED allowing the use of their car seats with inflatable seat belts. This is a retroactive change, meaning that if you are using a Chicco car seat with an inflatable belt you must stop. If you have a Chicco car seat that you purchased in order to use with an inflatable belt – and now no longer can use this seat due to their policy change – please contact Chicco’s customer service and they will handle these situations on a case by case basis.

In February 2017 Clek announced that they now allow the installation of all of their car seats (Foonf & Fllo) and boosters (Olli, Oobr, Ozzi) with Ford’s inflatable seats belts. This change is retroactive.

For the rear-facing Foonf & Fllo, keep the blue lock-offs closed and route the seat belt OVER the closed lock-off and use the vehicle lap belt’s own locking mechanism to hold the seat belt tight.

For forward-facing Foonf & Fllo open the appropriate red seat belt lock-off and keep it OPEN. For Foonf & Fllo (rear or forward-facing) you will always pull the vehicle lap belt all the way out to put the lap belt into it’s required car seat locking mechanism – and you’ll notice as you let the lap belt back in it gets tighter and stays tight). In some Ford/Lincoln vehicles you will notice that the seat belt buckle (the female end – the part with the red button) is angled more towards the front of the car in some seating positions, and more towards the roof of the car in others. A forward-facing car seat is more likely to get tight if you choose the buckle that is angled towards the roof (straight up). For example, in the Ford Explorer with bench seats, the driver’s side buckle is angled more to the roof and the passenger buckle more to the front of the car.

For both rear & forward-facing, have one person push down and wiggle the seat while the other person feeds the lap belt forcefully downward into the hole it comes from. If the vehicle seat back reclines (like in the Ford/Lincoln SUVs) you will absolutely want/need to use the seat back recline trick shown here to help you get the seat tight. 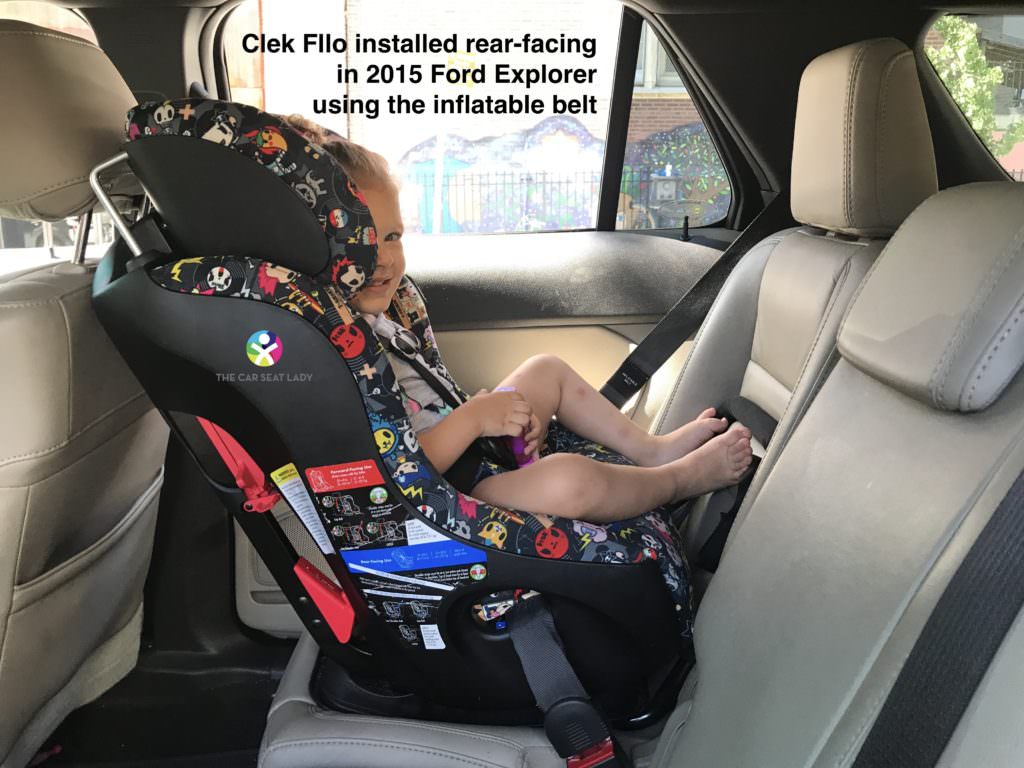 In Sept 2016 Diono announced that they now allow the installation of all of their harnessed seats and booster seats – both current models as well as older models and all Sunshine Kids models as well – in harness mode or booster mode using Ford’s inflatable belts. This change is retroactive – so if whether you have a new Diono, or an older Diono or Sunshine Kids, you can use it in any mode (harness or booster) with an inflatable belt. See here for more information from Diono.

Both the carrier and the base may be installed using an ISB.

When installing the base with an ISB, do not use the shoulder belt lock-off.

When installing without the base using an ISB, do not use the European belt path (i.e. do NOT route the shoulder belt around the carrier and into the blue guide in the back).

Evenflo allows the use of an ISB with any of their booster seats (where the child wears the vehicle’s seat belt as their restraint).

They do NOT allow the use of an ISB to install any of their harnessed seats.

Graco Convertible Car Seats: Convertible car seats are approved, but when installing do NOT use the shoulder belt lock-off with inflatable belt systems. This includes all models of the Contender™ 65, Ready Ride™, ComfortSport™, My Ride™ 65, Fit4Me™ 65, Size4Me™ 65, MySize™ 65, Headwise™ 65, Sequel™ 65, Sequence™ 65, and Extend2Fit® Convertible Car Seats.

Graco All-in-One Car Seats: All-in-One car seats are approved, but when installing do NOT use the shoulder belt lock-off with inflatable belt systems. This includes all models of the following both as a harness seat and a belt-positioning booster seat, Extend2Fit® 3-in-1, Milestone™, 4Ever®, and Smart Seat™.

Graco Booster Car Seats: All models of Graco booster seats may continue to be used with Ford inflatable seat belts. This includes all models of the following Tranzitions™, Wayz™, Atlas™, Nautilus™, TurboBooster®, and Affix™.”

An ISB is allowed for securing a child in a Churchill or Chamberlain. An ISB may be used to install a Roosevelt using the long belt path.

An ISB may NOT be used to install the Jefferson or Wallenberg, or the Roosevelt using the short belt path.

The Aace booster may be used with an ISB.

Pipa and Rava are NOT allowed to be installed with an ISB.

Peg Perego allows the use of inflatable belts on all car seat products manufactured after May 2014. It is important to note that Peg Perego requires specific shoulder belt routing on rear facing infant seats – specifically, the inflatable shoulder belt cannot be routed through the integral Right Tight lock off clip (in the base of the Peg Perego 4-35 and 4-35 Nido).

Additional Info: You can also see this document here which aggregates the policies of all the car seat manufacturers on the use of their seats with inflatable belts. 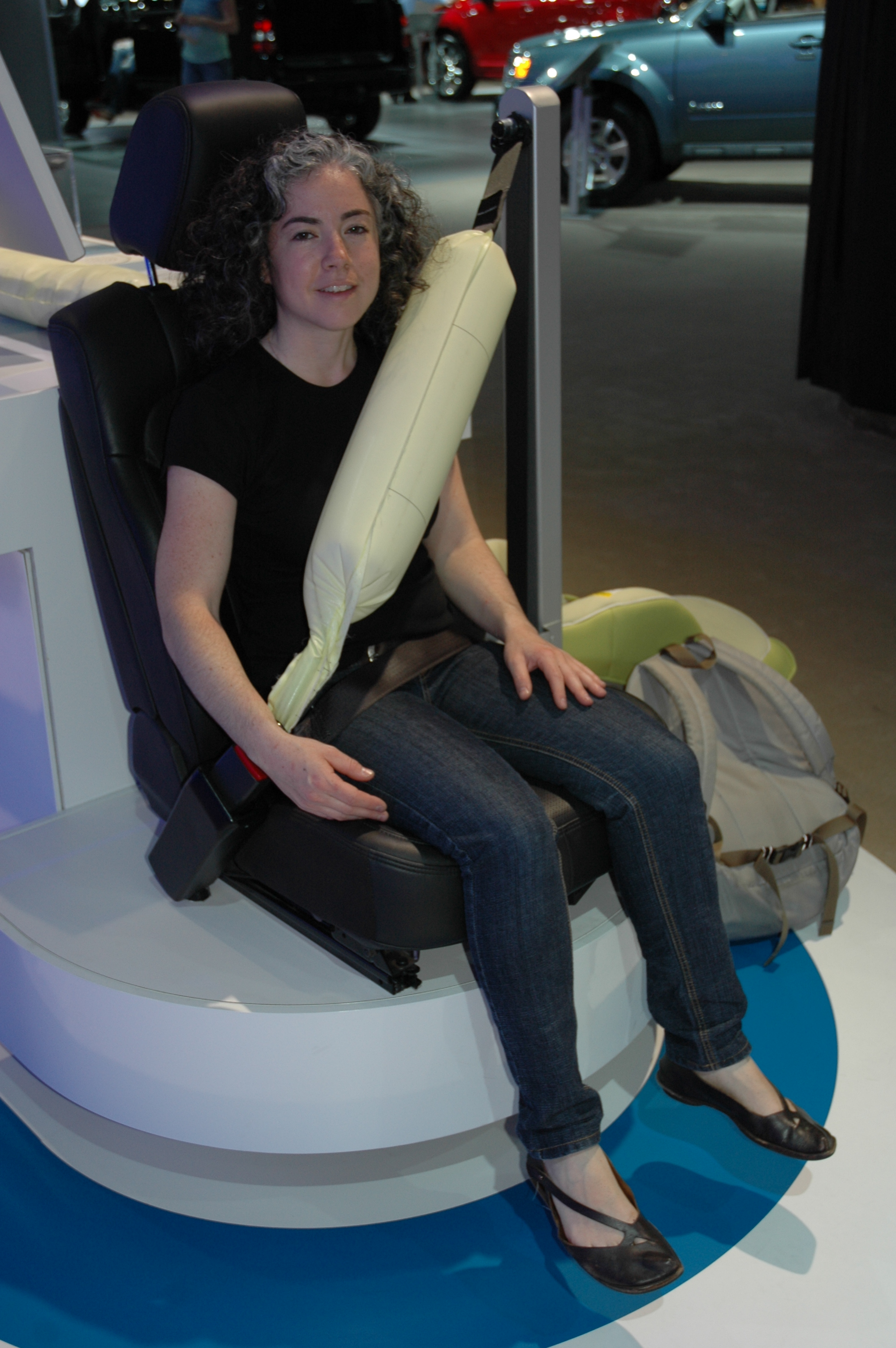 If you have a Mercedes Benz with a Beltbag:

Mercedes says the following in the vehicle owner’s manual:

Note that no car seat manufacturer in the US approves of the use of their car seats with the Beltbag. Therefore, you will need to use LATCH to install car seats in this vehicle, or get a car seat from Mercedes that is approved.

For pictures on what the “guts” of the Beltbag looks like and how it is connected to the vehicle, see here. 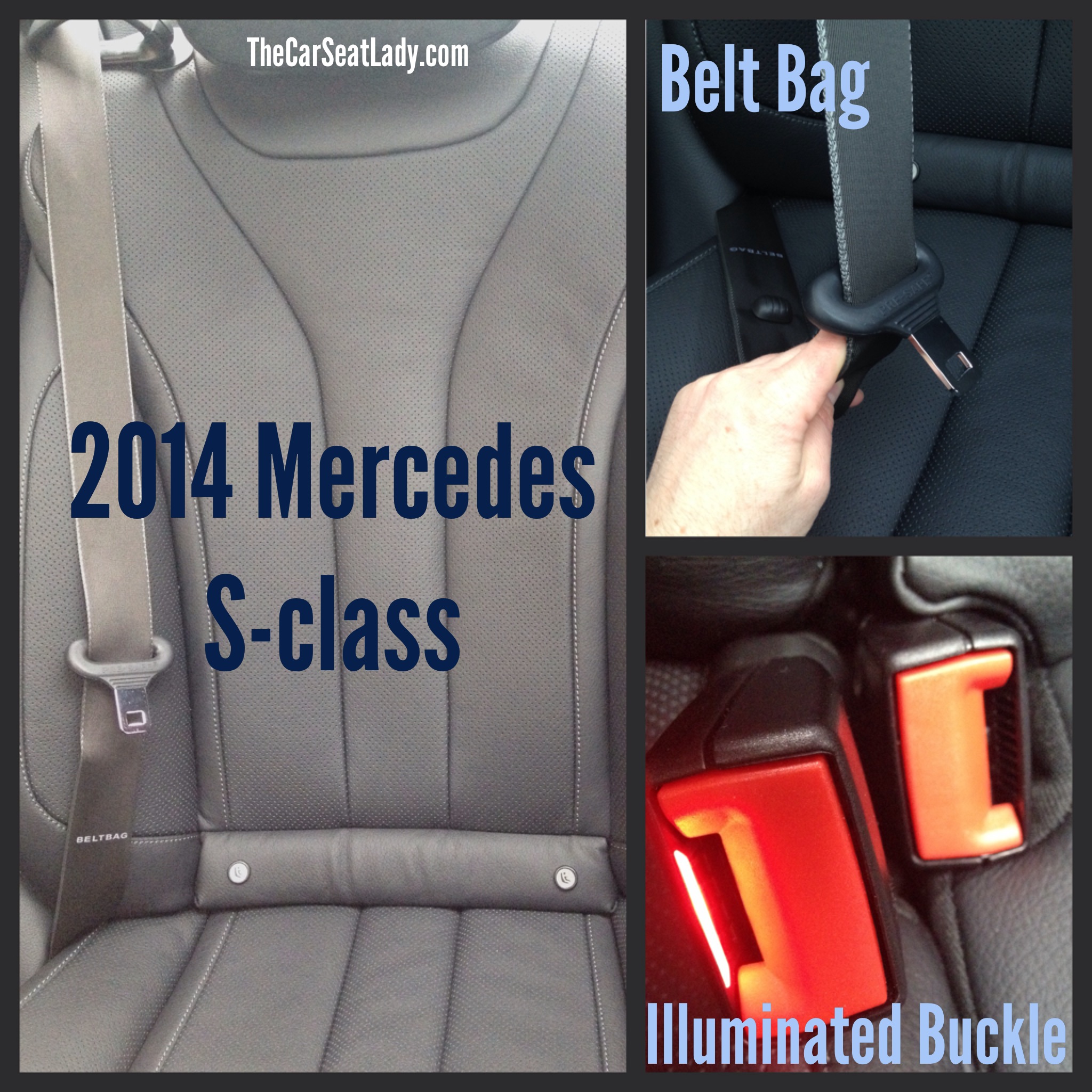