Every new parent worries about the position of their newborn’s head. Most parents are surprised to learn that what they thought was the best position may not be the best one!

This article draws on both The Car Seat Lady’s knowledge as a child passenger safety instructor AND a pediatrician with 4 years experience working in a neonatal intensive care unit (NICU) putting hundreds of preemies and newborns into car seats.

What is a good head position for a newborn? 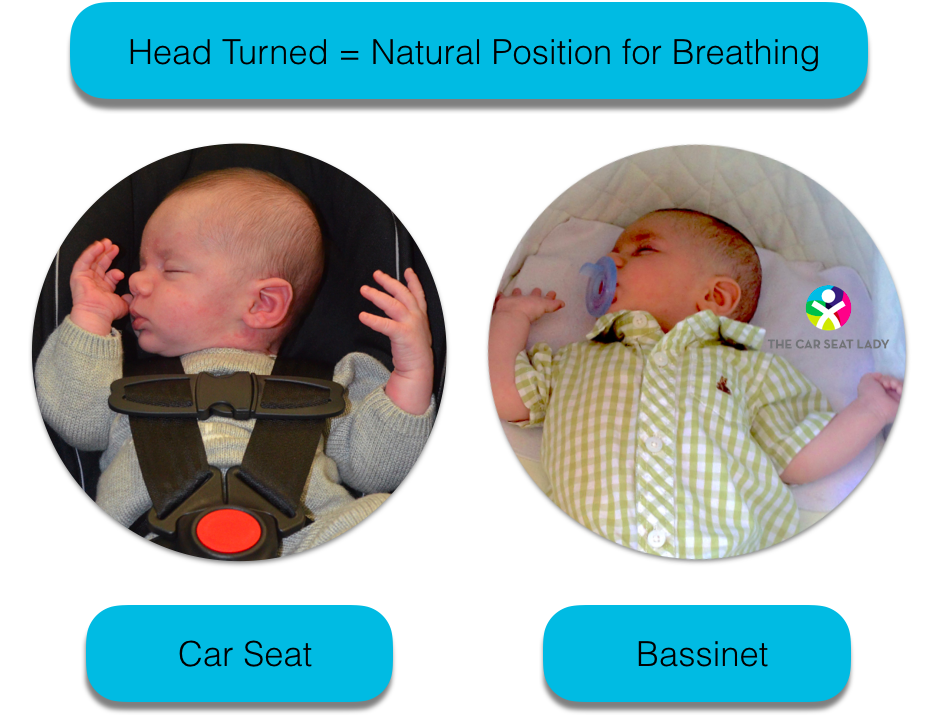 Ever notice that when babies sleep in their cribs or bassinets, they usually have their heads turned to the side? The head turned to the side is a very natural position for breathing. Next time you hold a baby against your chest – or wear them in a carrier – notice how the baby’s head naturally turns to the side. 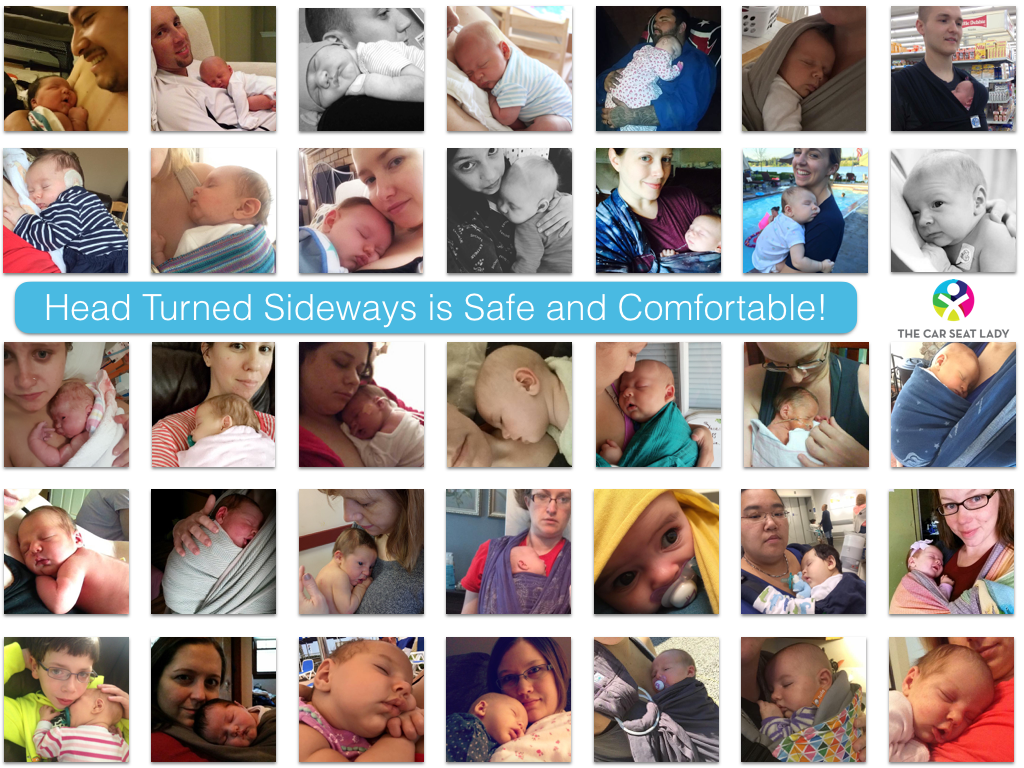 When parents see their newborn’s head turned to the side, many parents rush out to buy “infant head supports” which try to keep the head looking straight, but often by virtue of all the padding they have around and behind the head only serve to push the baby’s head down onto his chest, which is dangerous (not to mention that the use of inserts that didn’t come with the car seat typically violates the car seat’s instructions and can make baby less safe in a crash too). 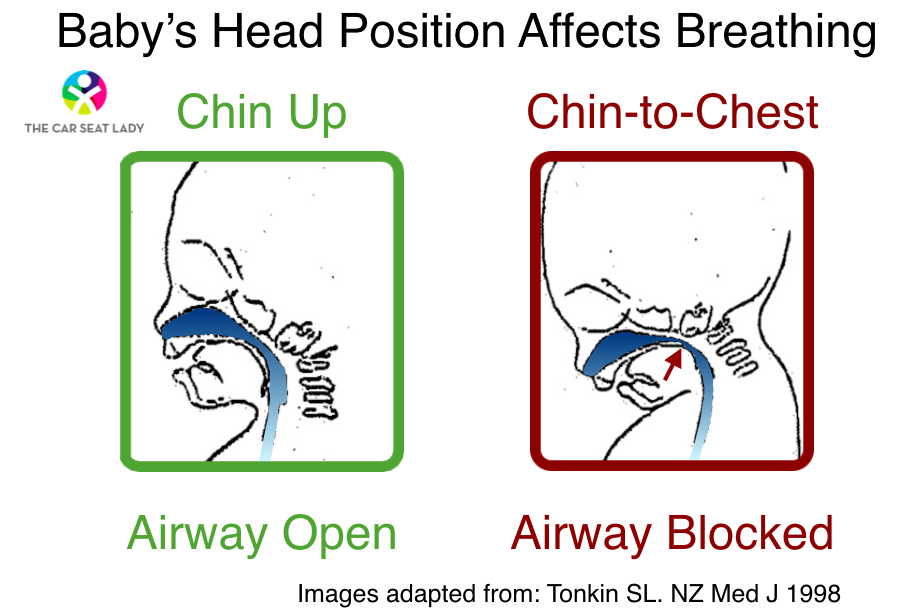 When your chin falls to your chest it is hard to breathe as you block off your airway. Anyone who can sit upright unsupported can easily pick their head up off their chest to breathe more easily – so if your toddler sleeps in the car seat with his chin on his chest he’ll be fine as he can pick his head up if he has trouble breathing. However, newborns can not pick their heads up, and the chin-to-chest position is a very dangerous one – it is dangerous in the car seat, the bouncy seat, the swing, the stroller, etc.

Many parents are surprised to learn that the head inserts that come in some infant seats – and in particular the head inserts sold separately – tend to make your baby’s head MORE likely to fall into a chin-to-chest position as there is padding placed behind directly behind the head. 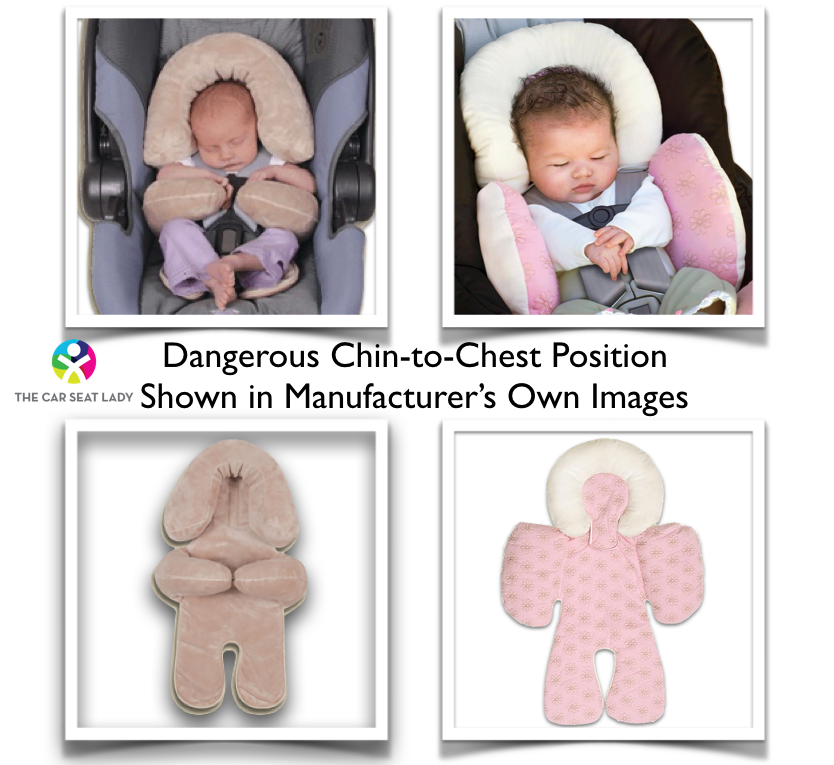 What about putting rolled burp clothes or receiving blankets around the baby’s head?

If you feel like a preemie or newborn needs some extra support around the head to keep it from wobbling excessively, take 2 receiving blankets and roll them alongside the baby’s entire body – and double them over at the head area as shown above. You want the blankets along the side of the body – and not just around the head – to ensure the blankets stay in place and don’t accidentally move to behind the head which could push the chin down. 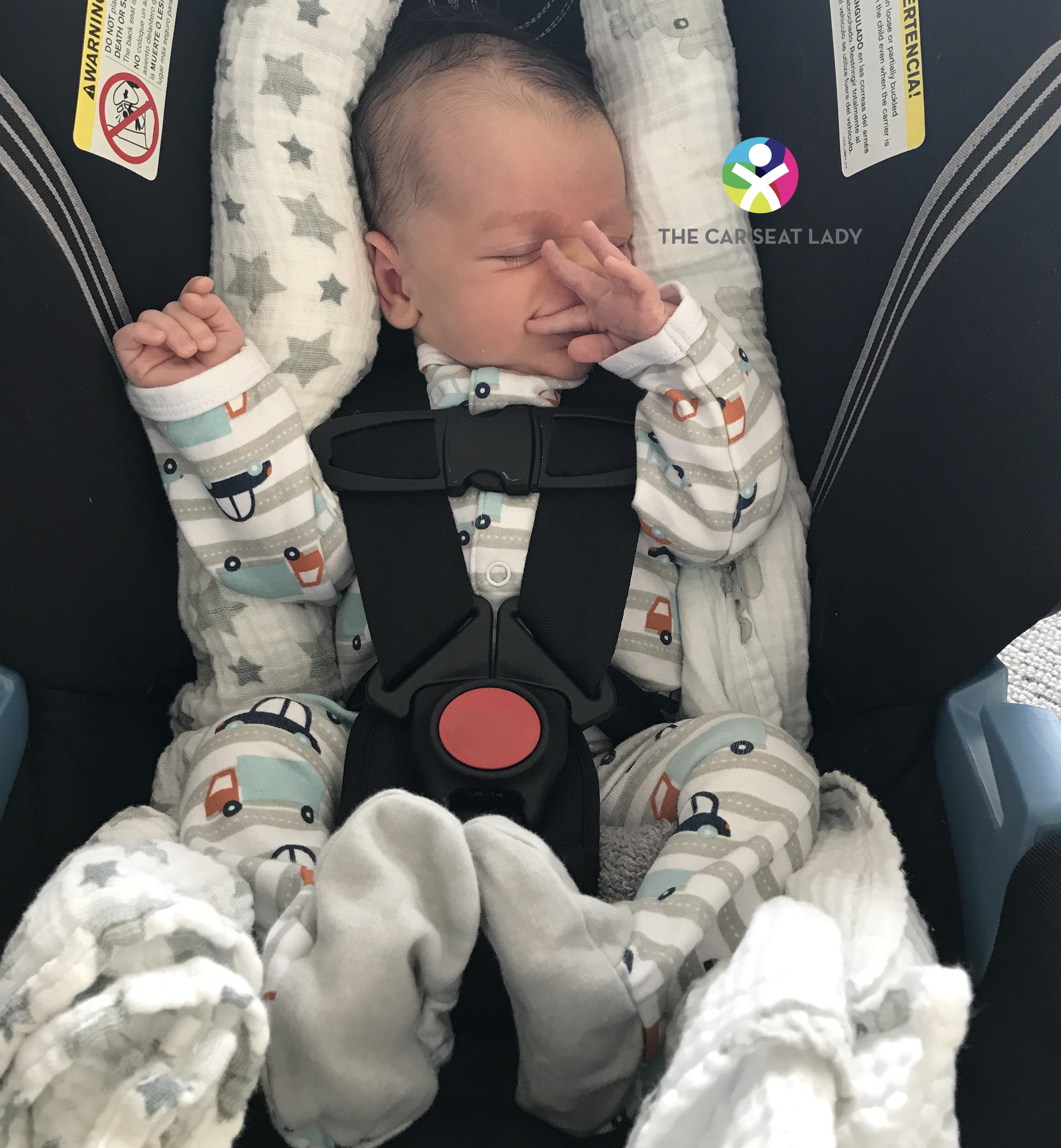 If you do put anything alongside the head make sure it is rolled firmly and if the baby were to pull his head forward would not prevent the baby from putting his head back against the car seat. 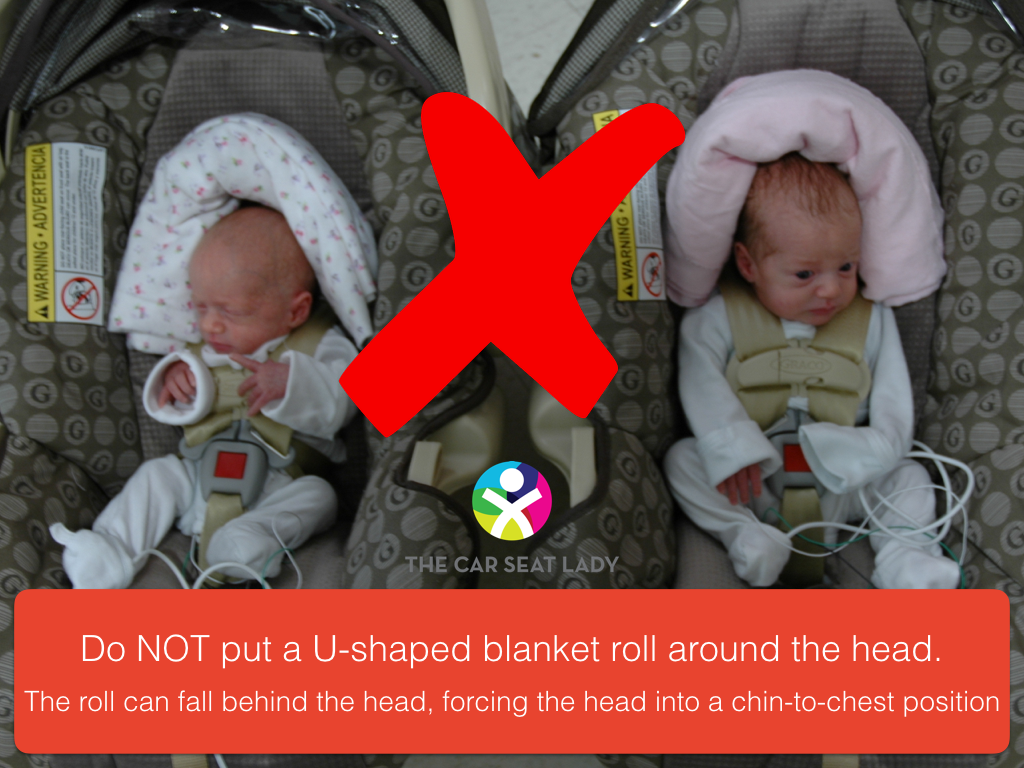 What about in a crash?

Many parents believe that the pillowy inserts that come with their baby’s car seat – or the rolled receiving blanket or burp cloth a friend suggested they put alongside the baby’s head – are there to keep the baby’s head safe during a crash. Surprisingly, this is not the case. A receiving blanket or other type of soft object placed alongside the head will compress in a crash to a degree that it will not limit the motion of the baby’s head and neck in a meaningful way. Limiting the motion of the head and neck must be done by a structural part of the car seat – like a built in head restraint in the car seat that is close fitting to the child’s head – as found on some car seats with no-rethread harnesses. 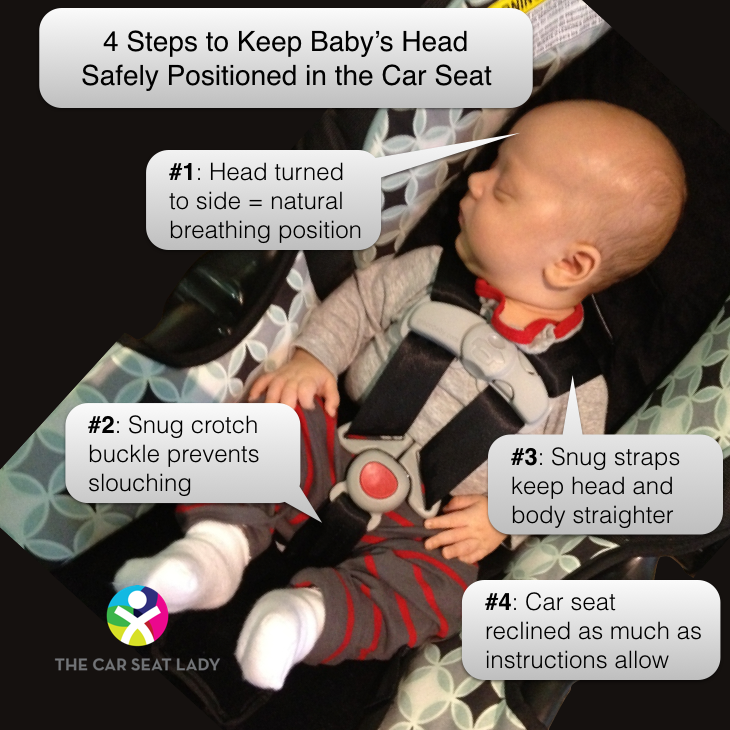 Snug straps are crucial to keeping your baby’s head in a safe position. If the straps are loosely buckled or unbuckled the baby can slouch or wiggle very easily into a position where their head falls down onto their chest and they can’t pick it back up to breathe. Whenever your baby is in the car seat – even if it is “just in the house” – make sure the straps are fully buckled AND snug.

Watch the video below to see how to buckle a newborn into a car seat and how to properly tighten the straps. Rewind the video to the beginning to watch about proper head position and dressing the baby properly for the car seat.

Most infant car seats come with a removable insert behind the baby’s head. If you find that the insert is pushing the baby’s head forward, check the instruction manual and if you are allowed to remove it, we suggest taking it out.

If the car seat has a no-rethread harness – which is where there is a panel behind the child’s head and back that moves up and down and pulls the shoulder straps higher or lower with it – you will NOT be able to remove this piece as it is a structural, and integral, part of your child’s car seat.

The closer the crotch buckle is to the baby’s bottom, the less the baby can slouch. Slouching is a problem because when the baby slouches, his head will fall down on his chest. If there is a significant gap between the crotch buckle and your baby’s bottom, take a tightly rolled washcloth and AFTER the baby is buckled snug, place the washcloth in a U-shape along the baby’s inner thighs to help fill in the gap.

All infant car seats give a range for how upright and how reclined the baby can sit. However, the more upright ranges are often way too upright for a baby who can’t sit upright unsupported. Therefore, we recommend installing your baby’s car seat to the most reclined range allowed for that specific car seat.