How should a rear-facing child sit in his car seat?

For safety and comfort, newborns should ride semi-reclined, so that the angle of the car seat (where their head and back rests) is reclined enough to keep their head back and their chin off their chest, but never more than 45 degrees from vertical. Most newborns will require a 45-degree angle to keep their head well-positioned and their airway open. We must position a newborn’s head and neck for him, because he doesn’t have the neck muscles required to hold his head up himself. Without this reclined position, a child’s head could easily fall down onto his chest, pinching off his airway. As he grows older and can hold up his own head, you can move the car seat into a more upright position (if permitted by the car seat manufacturer) to provide better crash protection and make an older child happier by giving them a better view out the back window. 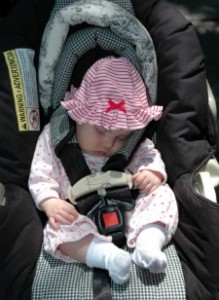 Before removing the head rest on your car seat, read the owner’s manual as some head rests are structural parts of the car seat and can not be removed – like those with a no-rethread harness including the Cybex AtonQ, UPPAbaby Mesa, Peg Perego 4-35 and others. If your head rest is removable, better positioning–even for the smallest preemies–can usually be achieved with a rolled diaper cloth or receiving blanket alongside the baby’s head. If a newborn needs extra head support, place two rolled up blankets or cloth diapers on either side of his head. Never place anything behind a newborn’s head or under his neck.

Note how the head support in the photo to the right pushes the child’s head forward, causing it to slump on her chest. Also note that the straps are much too loose–and read on… 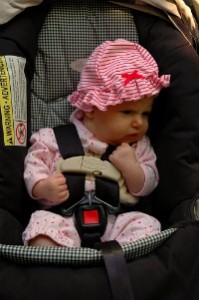 RIGHT: Straps snug, head turned to side (chin is not on chest), head inserts & strap covers removed to optimize fit

Properly tightened harness straps also help keep a newborn’s body straight, keeping his head straighter and allowing him to breathe more easily. Tight straps do more than just keep a child safely snug in a car seat! Since a rear-facing child is likely to slide up the seat in a crash, the shoulder straps should start slightly BELOW the child’s shoulders and come up and over in order to best prevent the child from sliding up too much. When the straps come so far below the shoulders that they slip off, you need to raise them to the next slot level. Note that many convertible seats have 3 slots for shoulder straps–the lowest two for rear-facing and the top one for forward-facing only.

We removed the head support and properly tightened the harness straps, making them so tight that you can fit only one finger between the straps the baby’s body. We also raised the chest clip to the baby’s armpit level. Finally, we removed the strap covers, which are too long to fit between the chest clip and the top of the seat, and would therefore interfere with getting the straps properly tightened. See how much better the baby’s head placement is!