Is it safe to take your child on the bus without a car seat?

It depends on which bus you’re going on!

School buses come in 2 sizes – long & short. How to keep your child safe in a bus depends on the size of the bus.

Of the relatively few injuries on buses, most happen in loading & unloading – not in a crash. Large yellow school buses are designed to protect school age kids & up in a frontal crash without the need for seat belts using “compartmentalization”. Compartmentalization is the fancy word for the very high, very padded, very closely spaced seats in a large school bus that are designed to restrain you in a frontal crash – your body goes into the seat back, the high padded back absorbs a lot of the energy of the crash and transfers the rest of the energy to a large portion of your body, and then you go back into your seat because the seats are so close together there isn’t anywhere else to go. Compartmentalization does not work in side impacts or roll-overs.

Buses in NY & NJ are required to have seat belts – but many just have lap belts. Some school districts are putting lap/shoulder belts into their new buses.

While compartmentalization works for school age kids & adults, it doesn’t work for pre-schoolers. Some buses have built-in car seats (like shown below) which are fabulous! 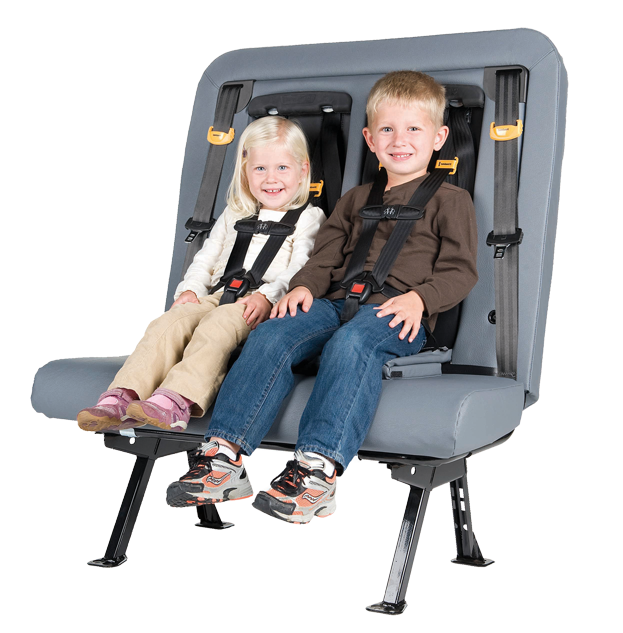 The best way to take a small child (under approx 40lbs) on a bus that doesn’t have built-in car seats is using a car seat that is designed specifically for a bus. The Safeguard Star & Super Star (which also comes in a model for children with special needs) is an ideal choice as the installation is simple and does not require a seat belt (the Star comes with belts that get wrapped around the bus seat). If your child is going on a bus you can buy one of these seats for your child to use on the bus (most cost about $150). If your child has an IEP and rides a bus to school you can get the cost covered under the IEP.

SHORT: Short buses do not have the safety features found in large school buses – and the same rules regarding car seats & boosters that apply to your own vehicle applies to small school buses. However, things quickly get complicated because while small school buses will have seat belts, they typically have just a lap belt – which won’t work for a booster (since boosters need shoulder belts). The female end of the lap belt is often very long which makes a secure installation of a traditional car seat impossible in many cases. In addition, most school buses do not have tether anchors – which are needed to keep a forward-facing child’s brain and spine safer (tethers are especially important when the child is very close to the seat in front of them… like on a bus).

The best way to take a pre-school or school age child on a small bus is using a car seat that is designed specifically for a bus (see image below). The Safeguard Star & Super Star (which also comes in a model for children with special needs) is an ideal choice as the installation is simple and does not require a seat belt (the Star comes with belts that get wrapped around the bus seat). The Super Star can be used for a child up to 90 pounds! If a child needs a rear-facing car seat, look for one that is as compact as possible since many can not fit in the cramped confines of a bus. If your child is going on a bus you can buy one of these seats for your child to use on the bus (most cost about $150). If your child has an IEP and rides a bus to school you can get the cost covered under the IEP. 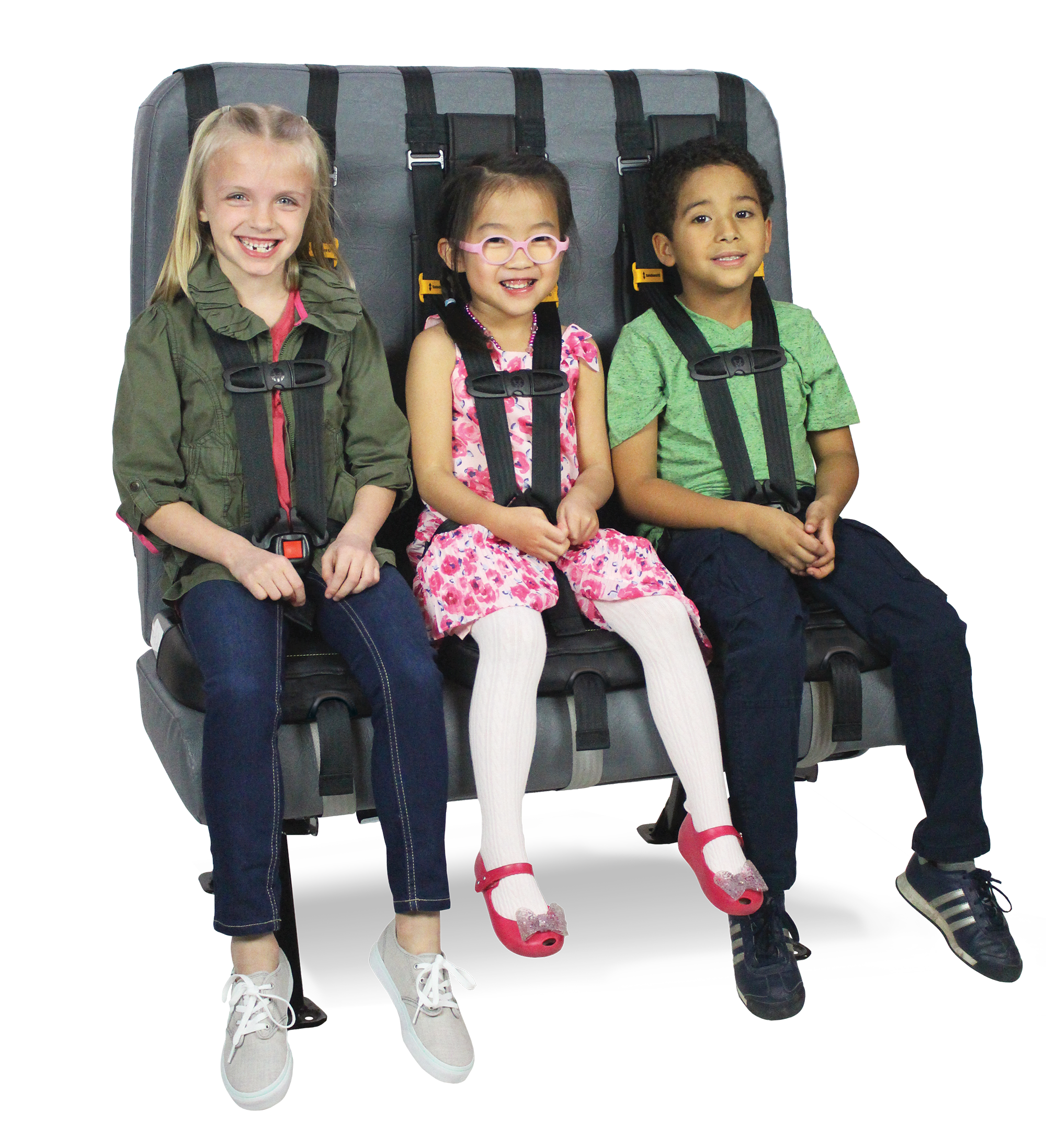 Note that 15 passenger vans (often called church vans) are NOT buses and are statistically the most dangerous form of ground transportation in the US. Many states forbid the purchase of these vehicles for the purpose of transporting school kids.

Public city buses are great modes of transportation and allow you to safely move around the city with your child without having to bring a car seat with you! Most kids love taking the bus. As a parent interested in your chilld’s safety, you should like the bus too, because buses are safer than cars.

Why is the city bus safe?

Buses are large and thus very visible, which means they’re less likely to be involved in a crash. They also move at slower speeds than cars (especially some NYC buses) which means any crash is likely to be less severe. When a bus is involved in a crash, the bus’s large size helps protect the passengers by absorbing most of the crash forces. Passengers are less likely to be injured also because–unless hit by another bus or truck–they are sitting high off the street, so they’re hit around their legs and feet, not around their head or chest like if they were riding in a car.

How do I bring my child on the city bus if not in a car seat?

You cannot use a car seat on a public city bus because the bus does not have a seat belt or lower latch anchors–so there is no way to secure the car seat properly. To safely take your child on the bus, make sure you hold your child tightly or use a front pack carrier (BabyBjorn, Ergo, Snugli, baby wrap, etc). And make sure you hold on yourself!! Obviously if you can get a seat, sit down. Kids will stay entertained by looking out the window and interacting with other passengers.

Long-distance buses – like Greyhound, MegaBus & tour buses – are a different story, and while it isn’t required that you use a child safety seat, it’s a good idea. Long distance buses travel at high speed on the highway. Fortunately, these buses are becoming safer for small children (and adults). Some buses now have seat belts and some even have lower latch anchors. If you plan to take a long distance bus journey with your child, find out which bus companies offer seat belts or lower latch anchors–and allow you to bring the child safety seat–and book your trip!

Is it safe to take your child on the train without a car seat?

Yes. Trains do not have seat belts or lower latch anchors, so there is no way to properly secure a car seat to a train seat. Like buses, trains are large and visible, thus less likely to be involved in a crash.

Make sure to bring a child safety seat with you if you will require it when you leave the train–for example, in a taxi or in a relative’s vehicle.