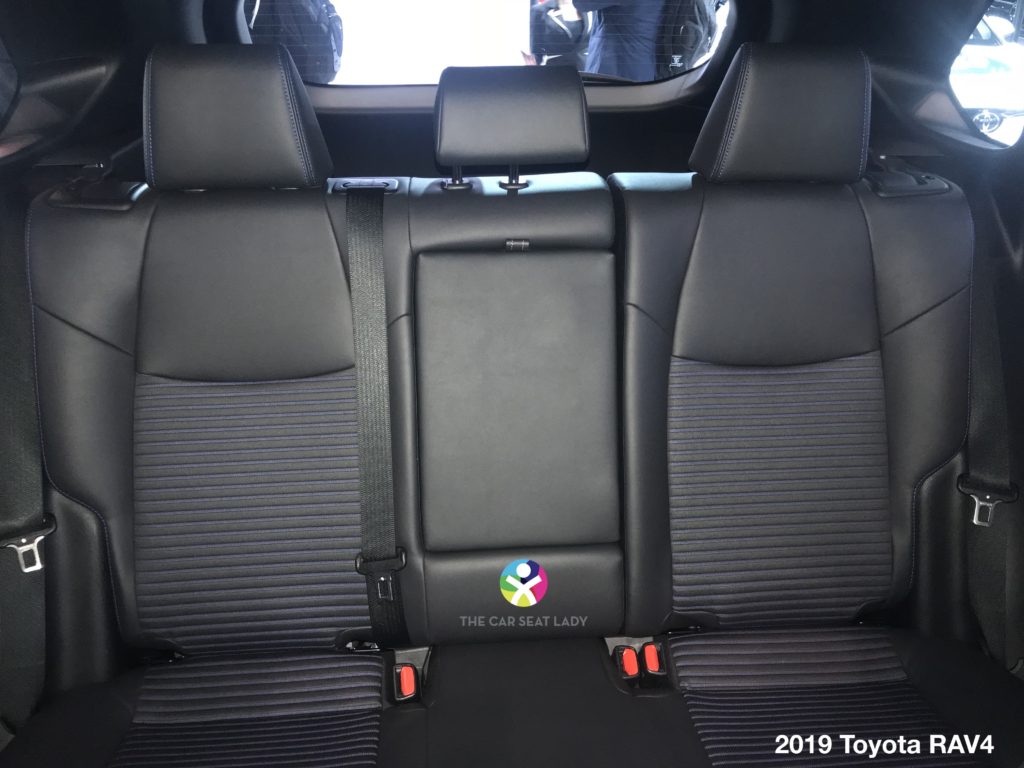 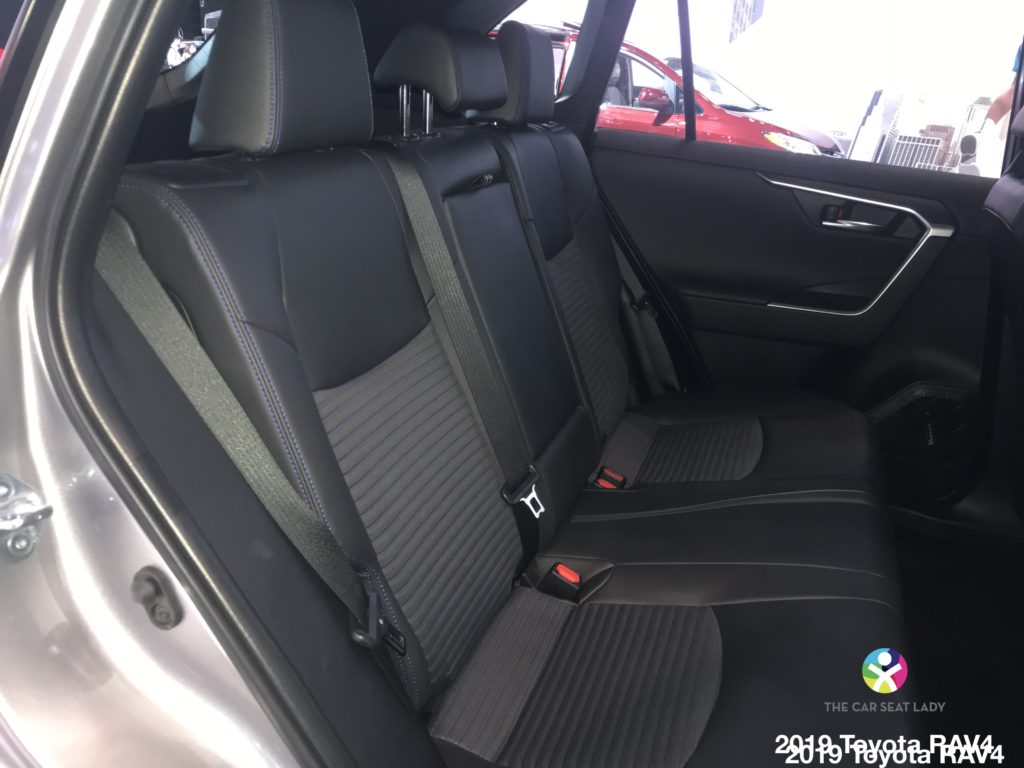 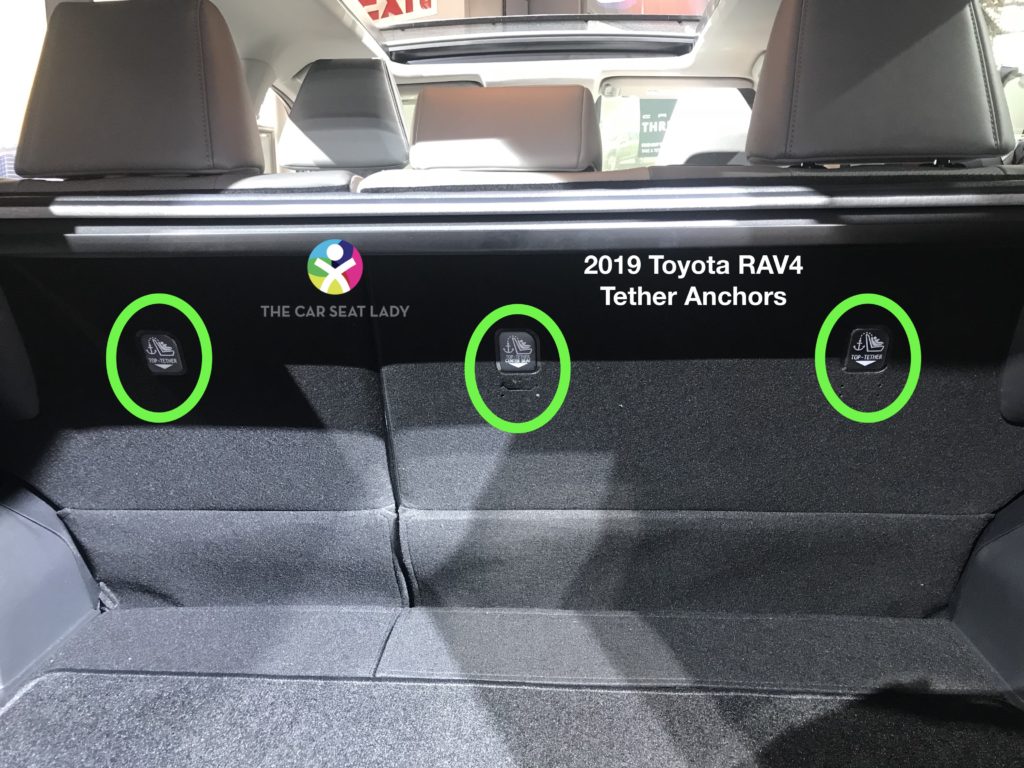 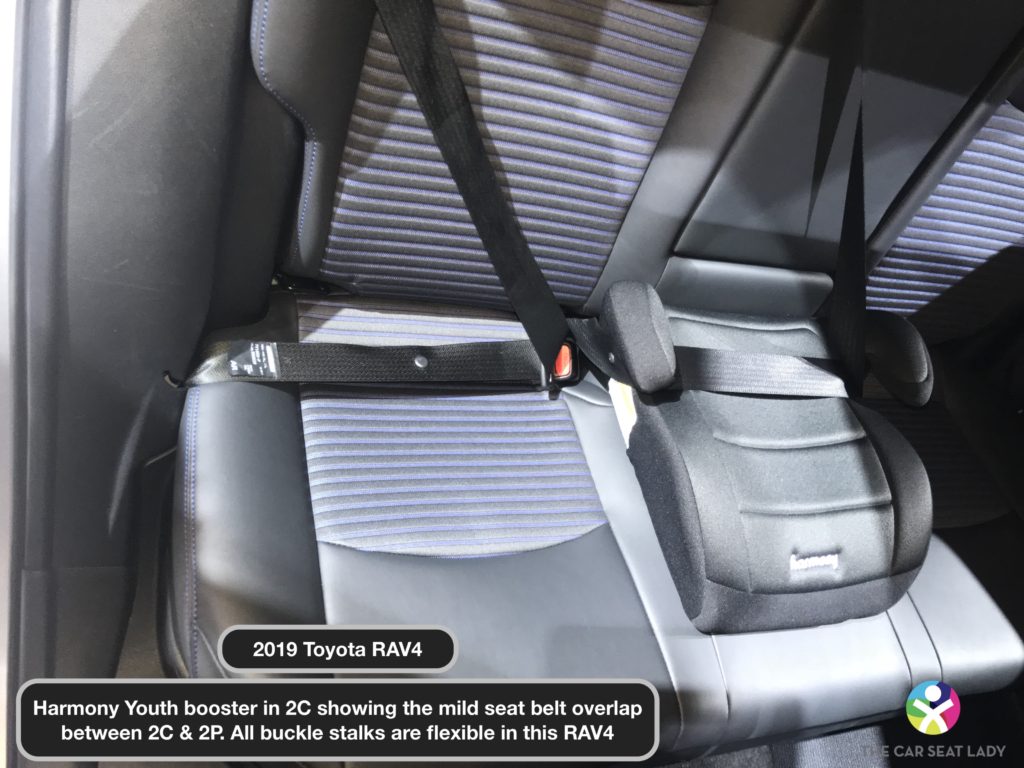 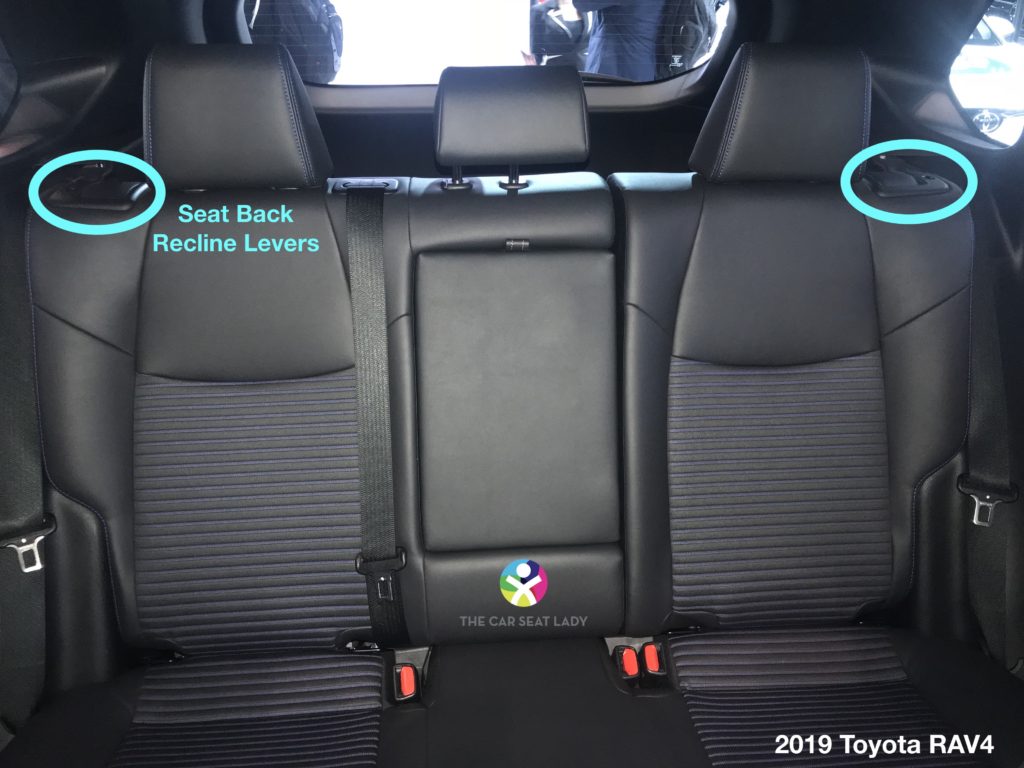 The RAV4 was redesigned for 2013… and it was not a good redesign. The extreme overlap between 2D and 2C (specifically the seat belt for 2C starts 5 inches into 2D) continues – and is made worse by the fact that now the buckles for 2D & 2P are mostly rigid which means they can’t be pulled out of the way of the center seat like they could in the 2013 when they were on a fairly long seat belt webbing stalk and were very flexible as a result. Because of this change, starting in 2014 it is NOT possible to put a car seat/booster in either 2D or 2C still have room on the other seat (2D or 2C) to fit a person/car seat/booster. In fact, for 2013-2015, Toyota specifically prohibited in their instruction manual having someone/something ride in 2D if 2C was being used for a car seat (as the car seat would sit on top of 2D’s seat belt buckle) as well as having someone/something ride in 2C if there was a car seat installed in 2D as the car seat in 2D would block proper routing of 2C’s seat belt and could harm the person in 2C.

With 2 children riding in the back seat, this back seat becomes a 2-seater – and the kids will typically go in 2D & 2P. There is NO way to safely fit 3-across in this vehicle if there are 2, or more, children in car seats or boosters. The RAV4 & NX for this model year range is a vehicle we STRONGLY advise against – as if you find yourself needing 3 in the back seat (kids + adults), this vehicle often won’t be able to do that safely. 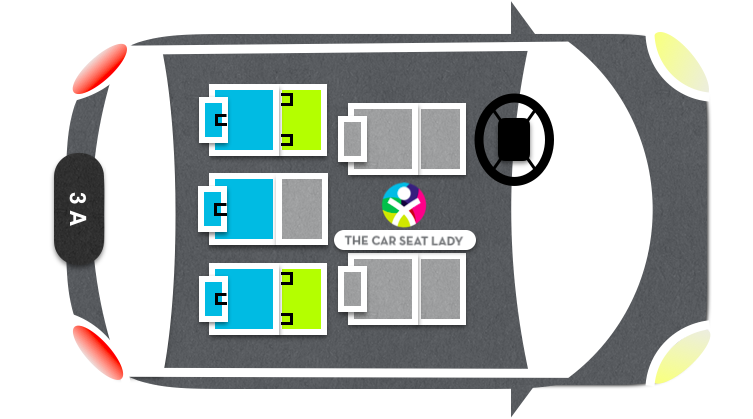 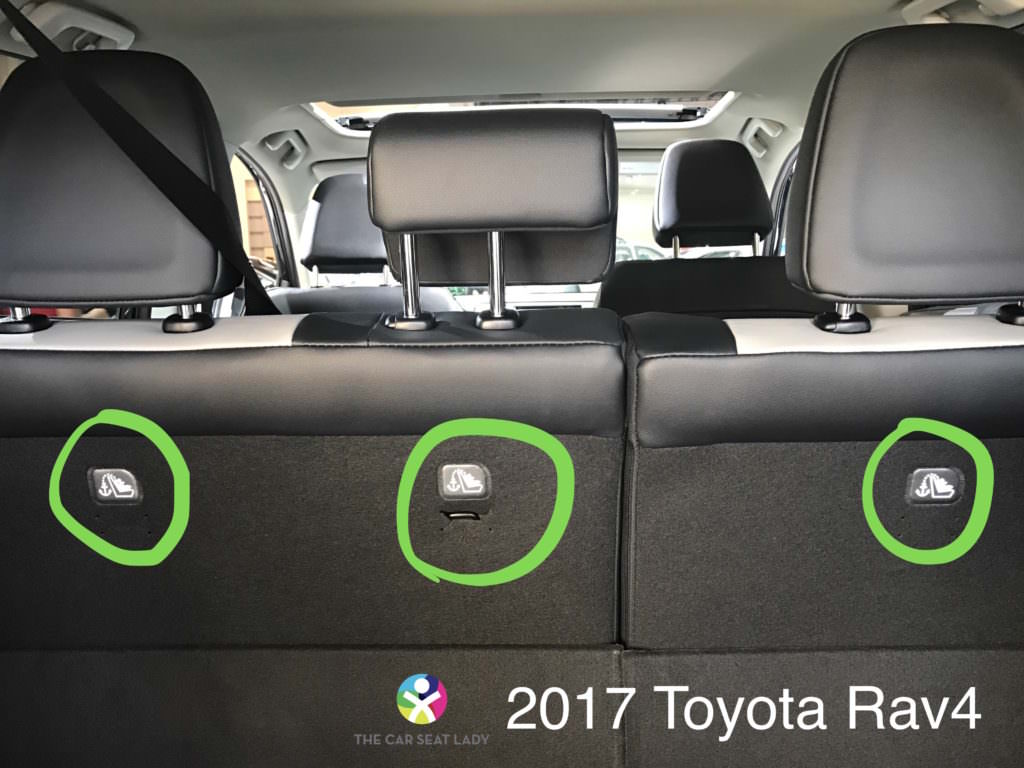 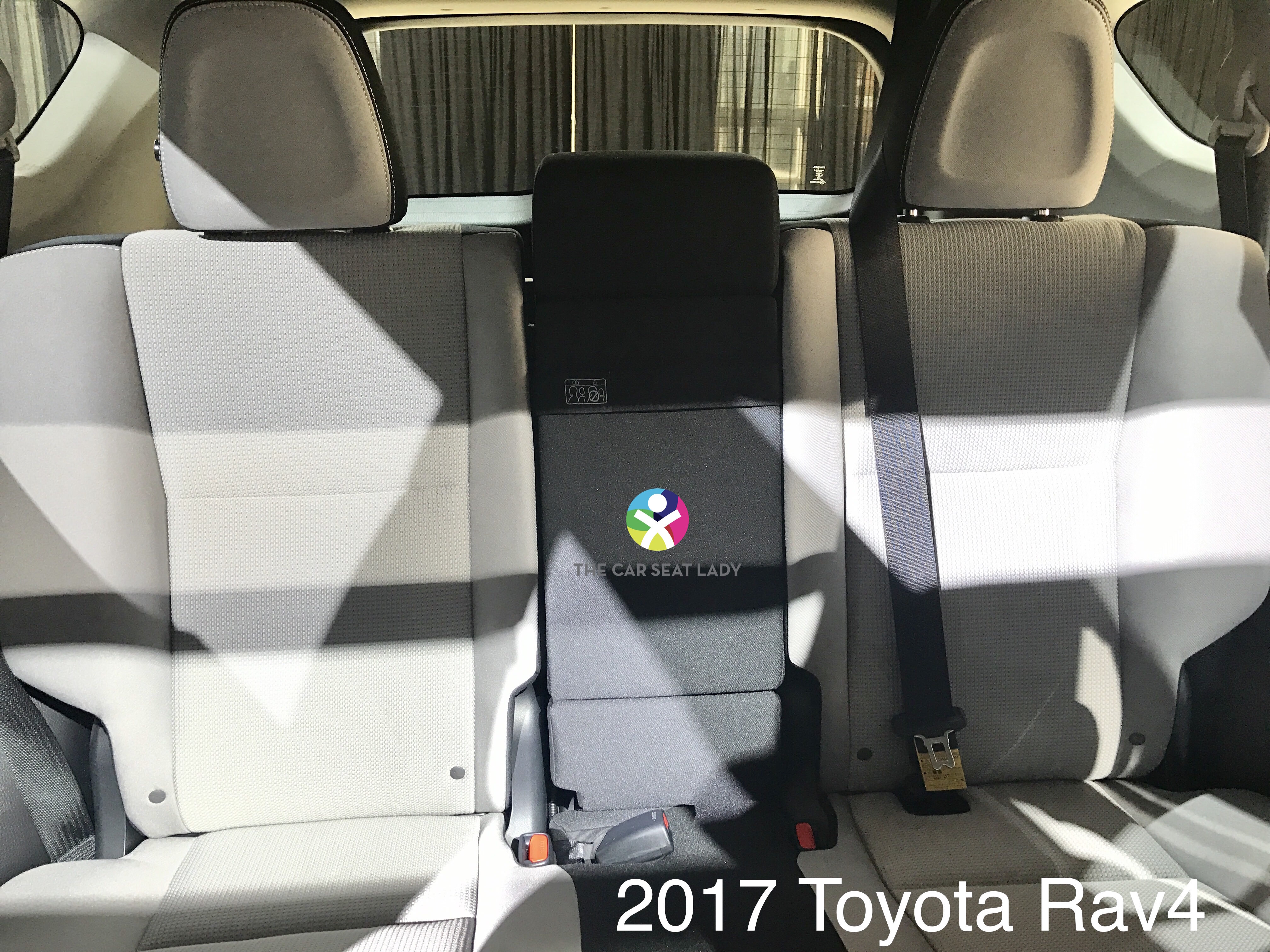 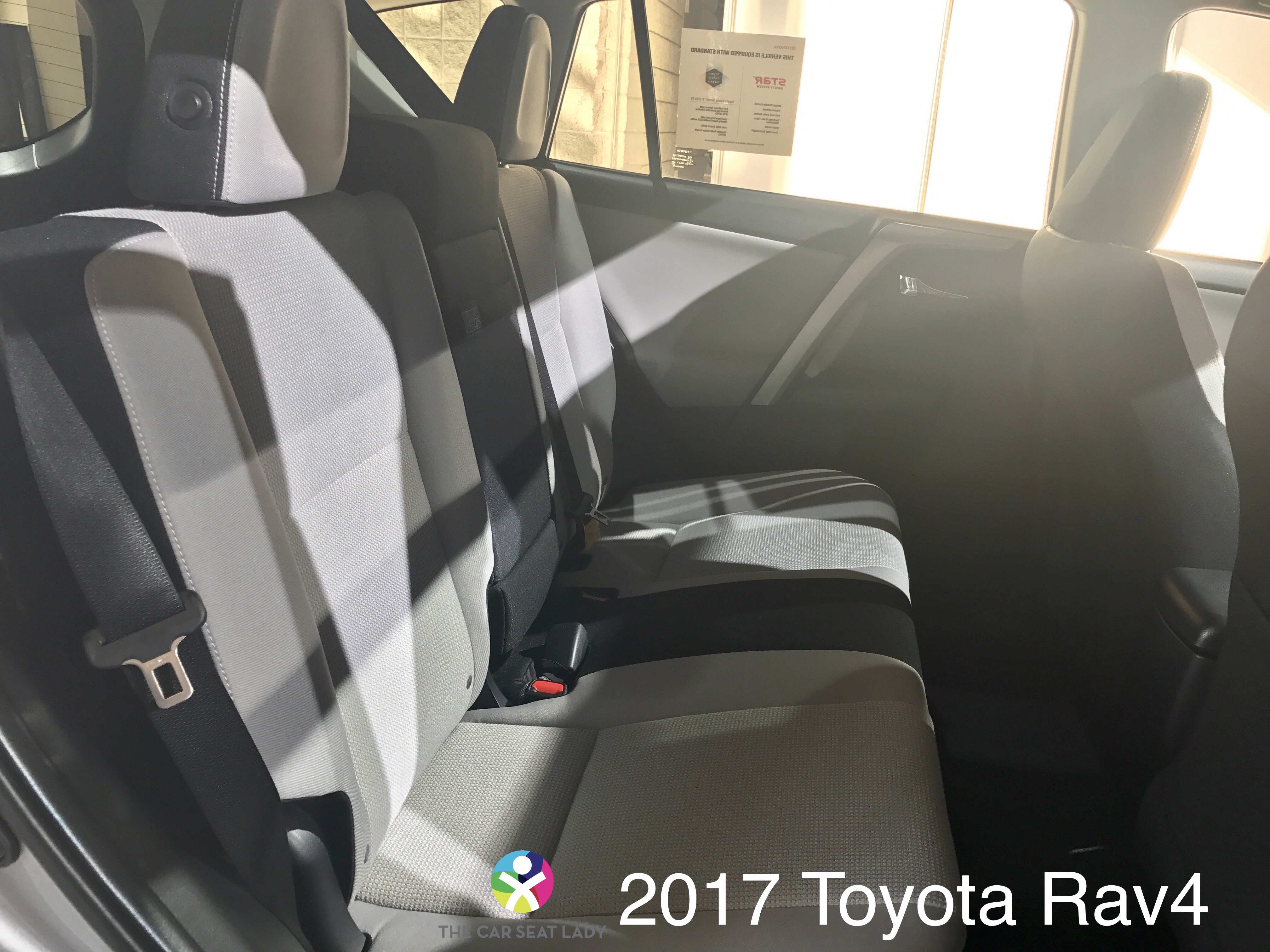 The center head restraint must be moved up when someone is sitting there – in order to provide whiplash protection. 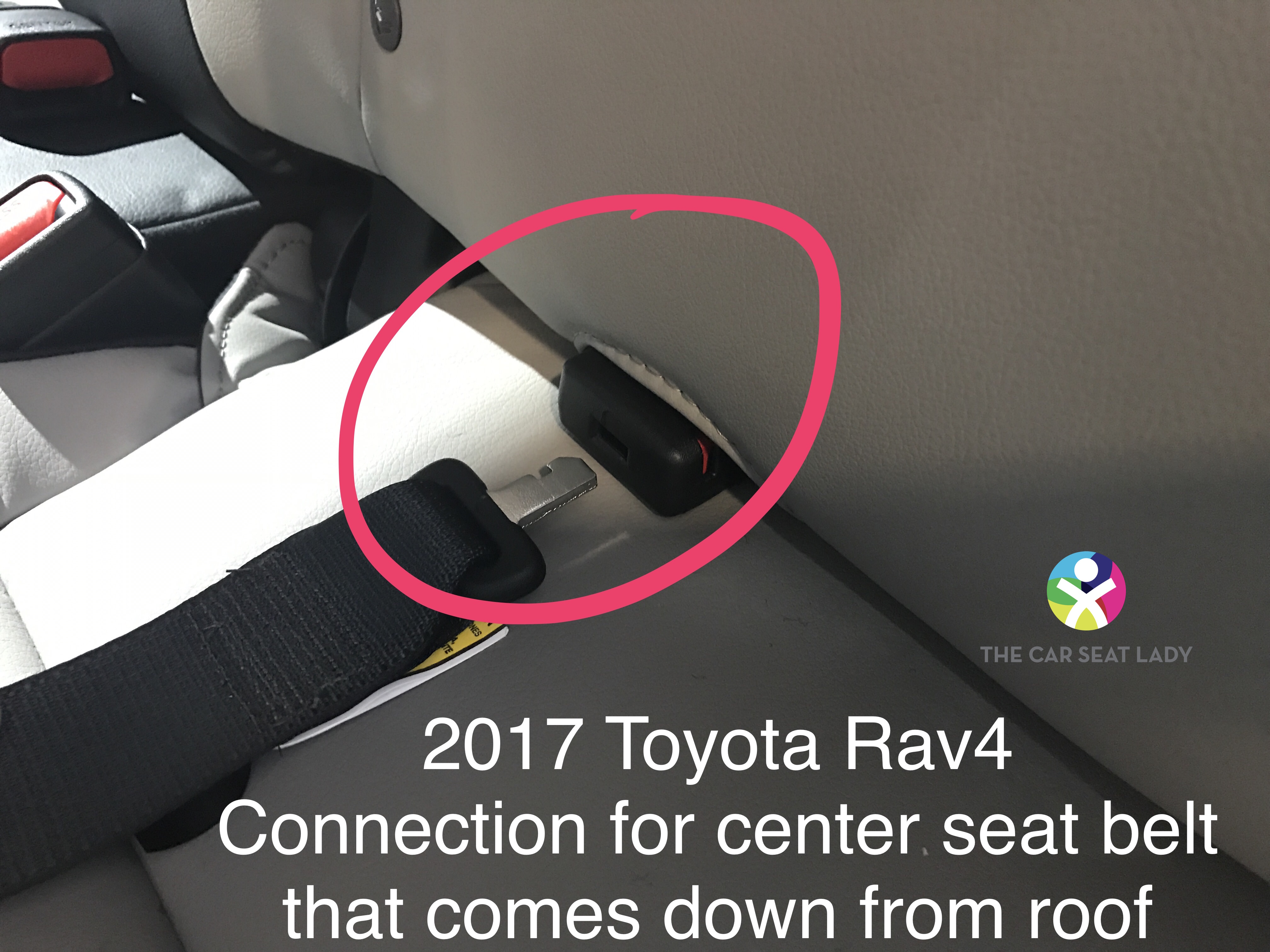 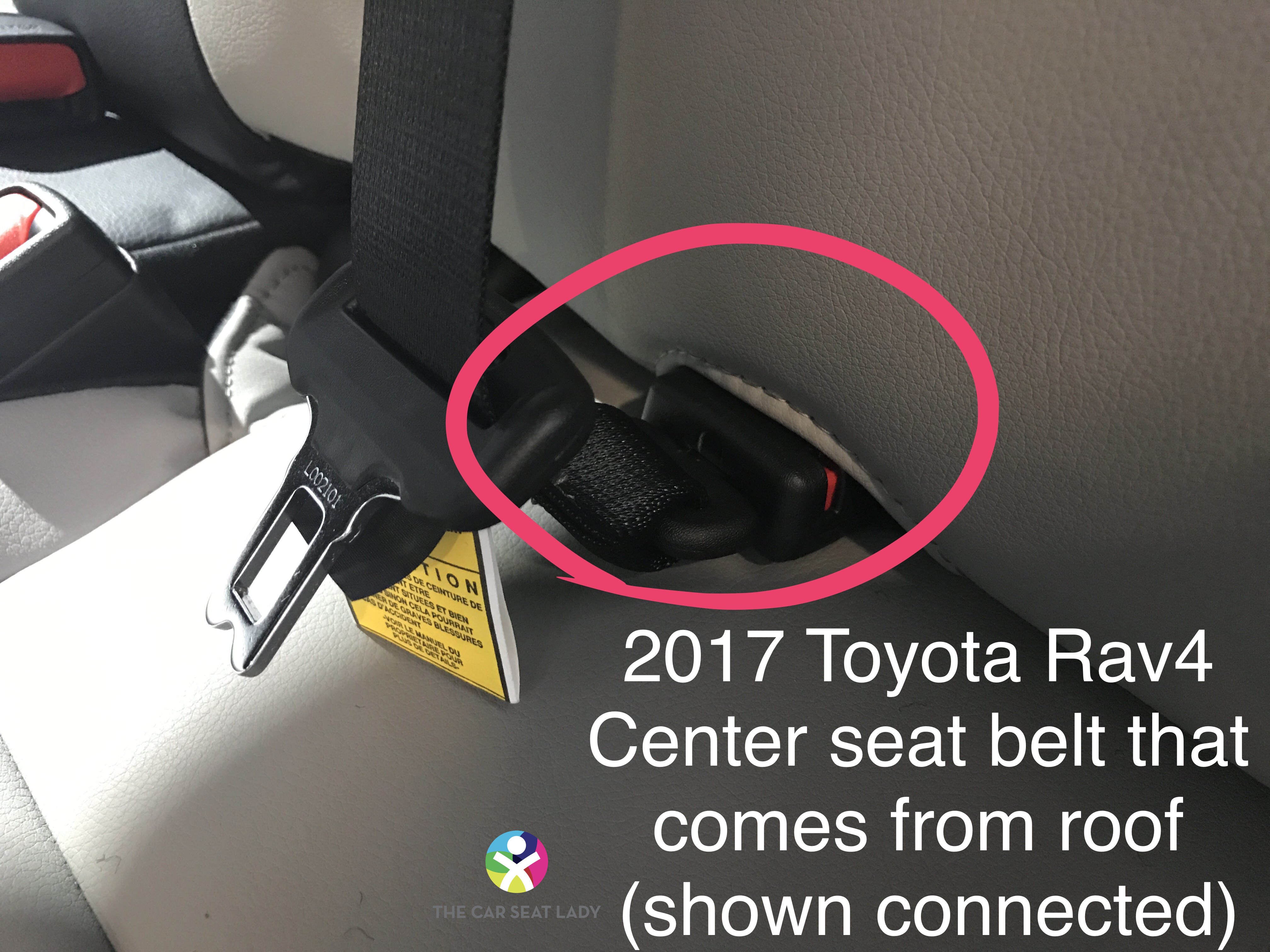 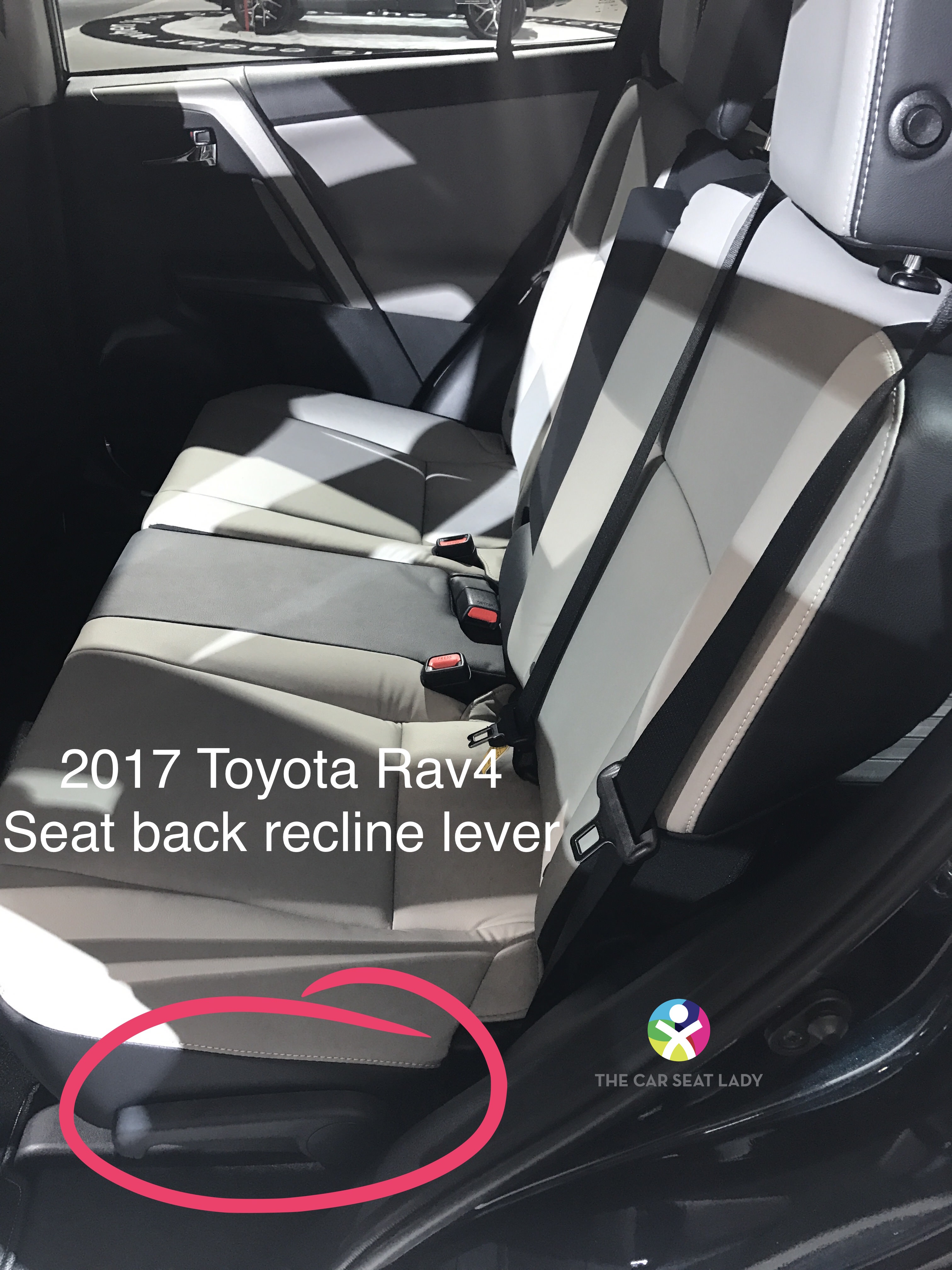 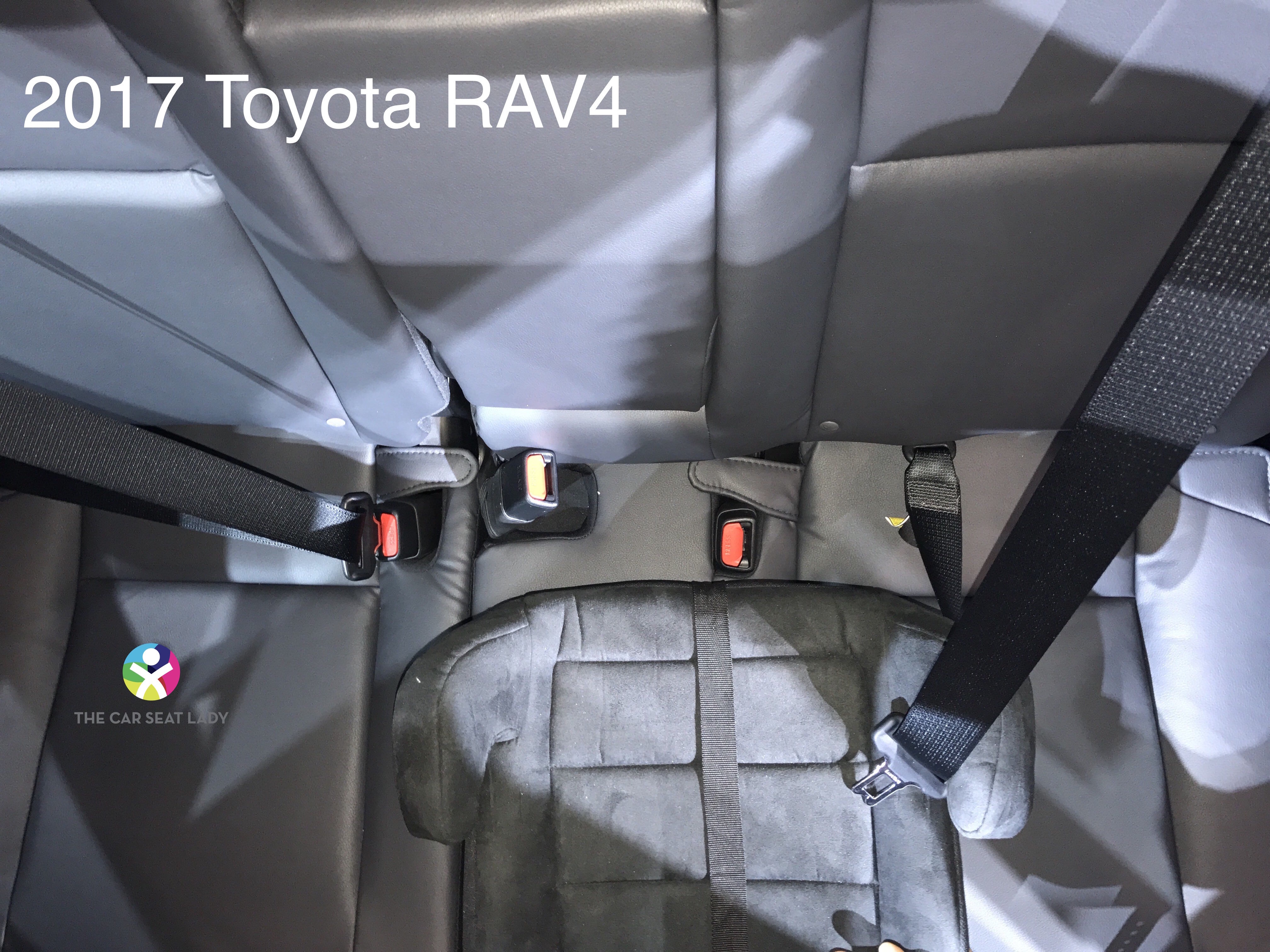 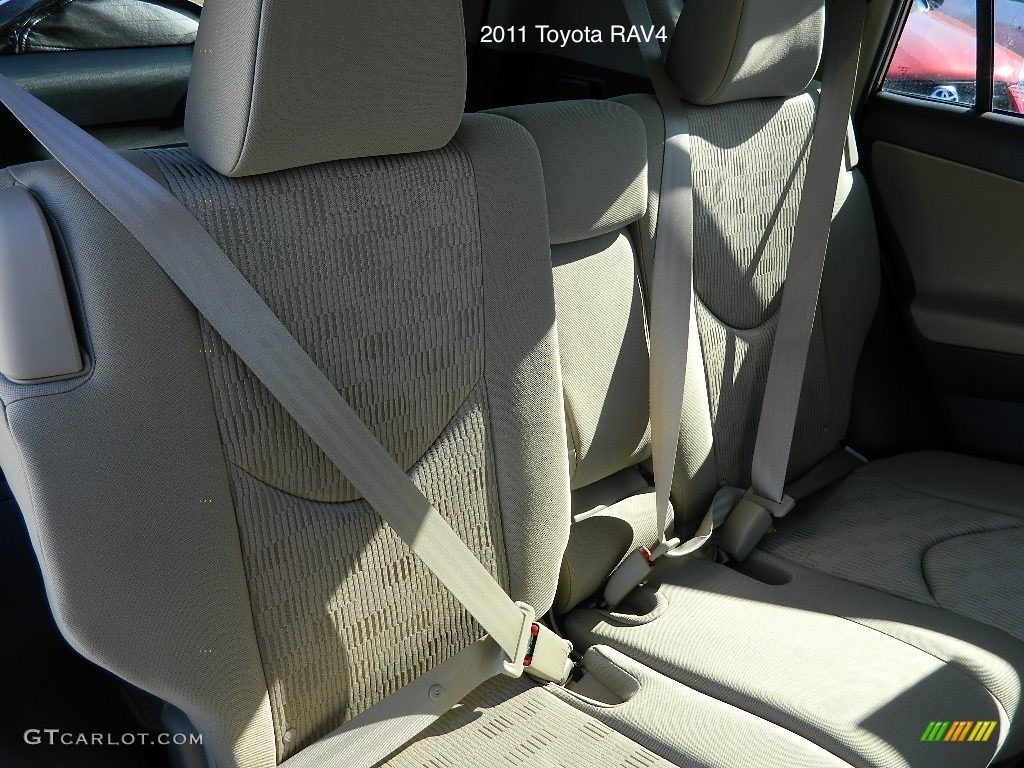 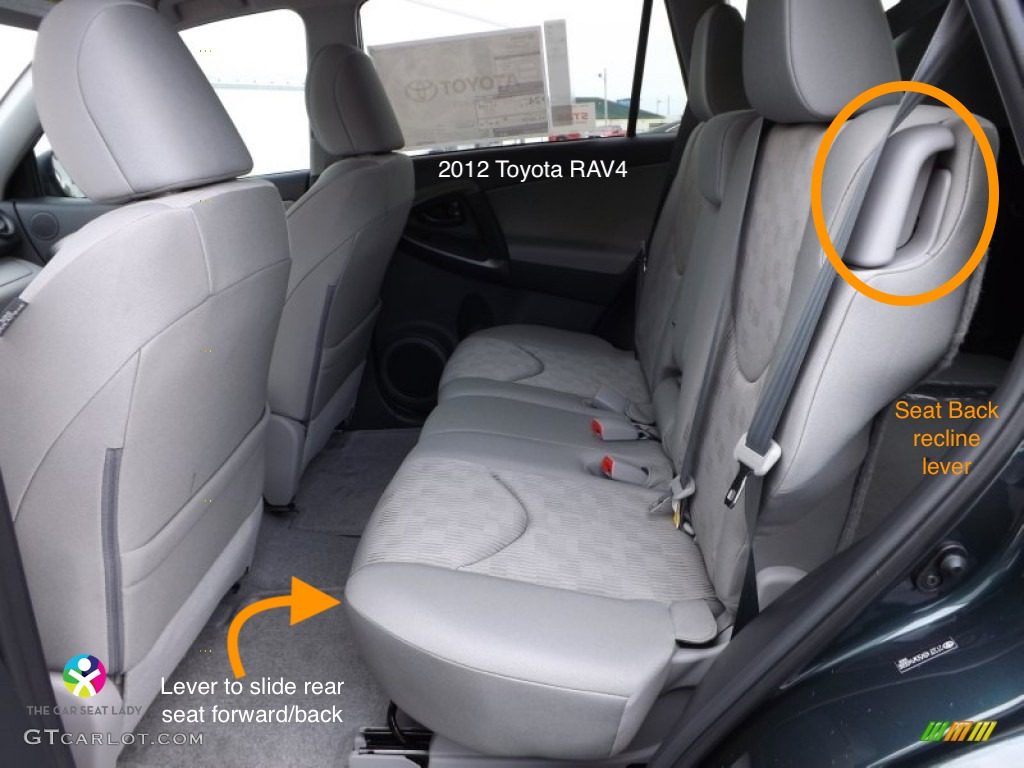 Tether anchors for 2D and 2P are located on the backs of 2D & 2P (it will be necessary to slide 2D or 2P forward in order to better access the tether anchor). Tether anchor for 2C is on the ceiling. Tether straps are routed under the head restraints. 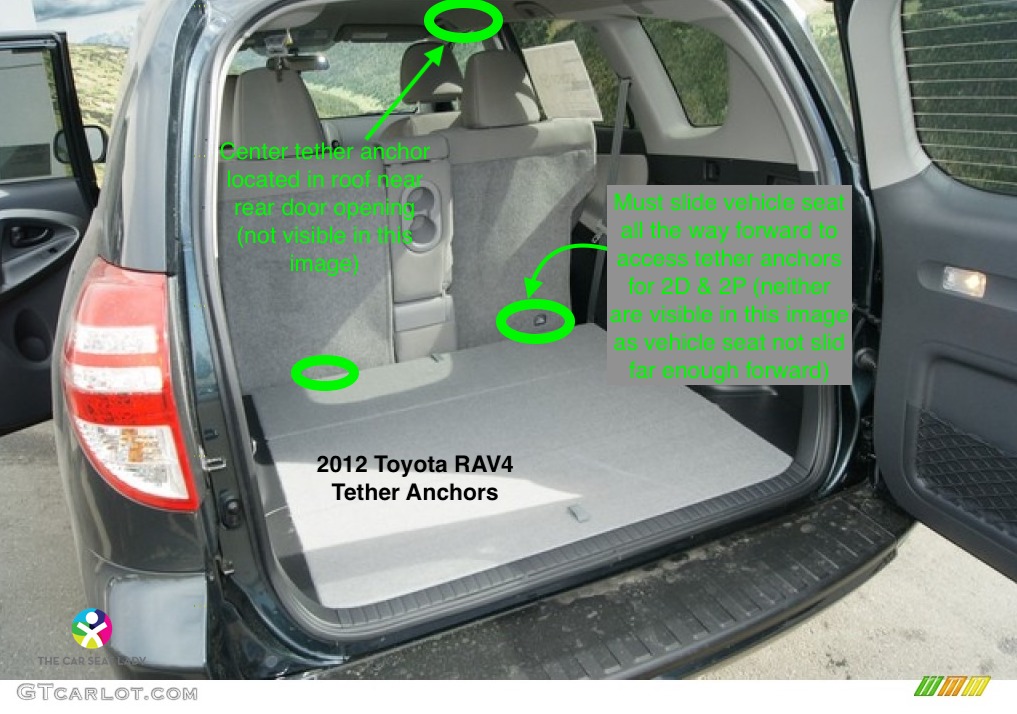 2001 was the first year the RAV4 had lower anchors (2D & 2P) and tether anchors (for all 3 seats). 2C now has a shoulder belt, but still has no head restraint – making it not a safe spot for an adult or a child in a backless booster due to the risk for severe whiplash injuries. 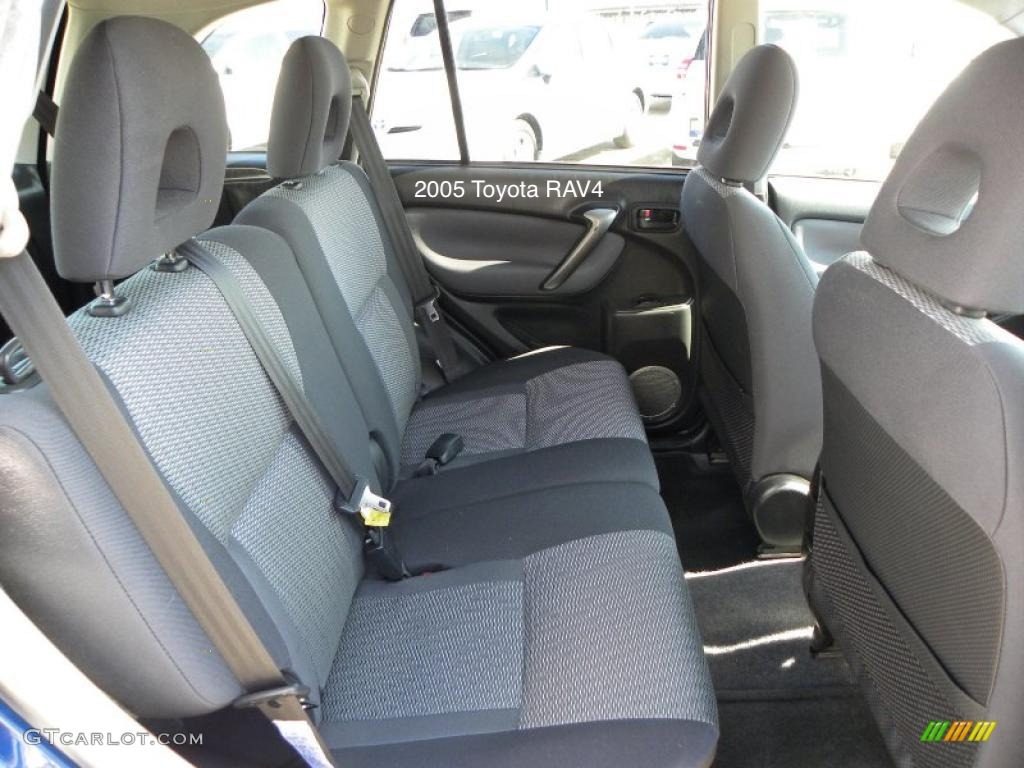 Tether anchors for 2D and 2P are located on the backs of 2D & 2P. Tether anchor for 2C is on the floor of the cargo area. Tether straps are routed under the head restraints. 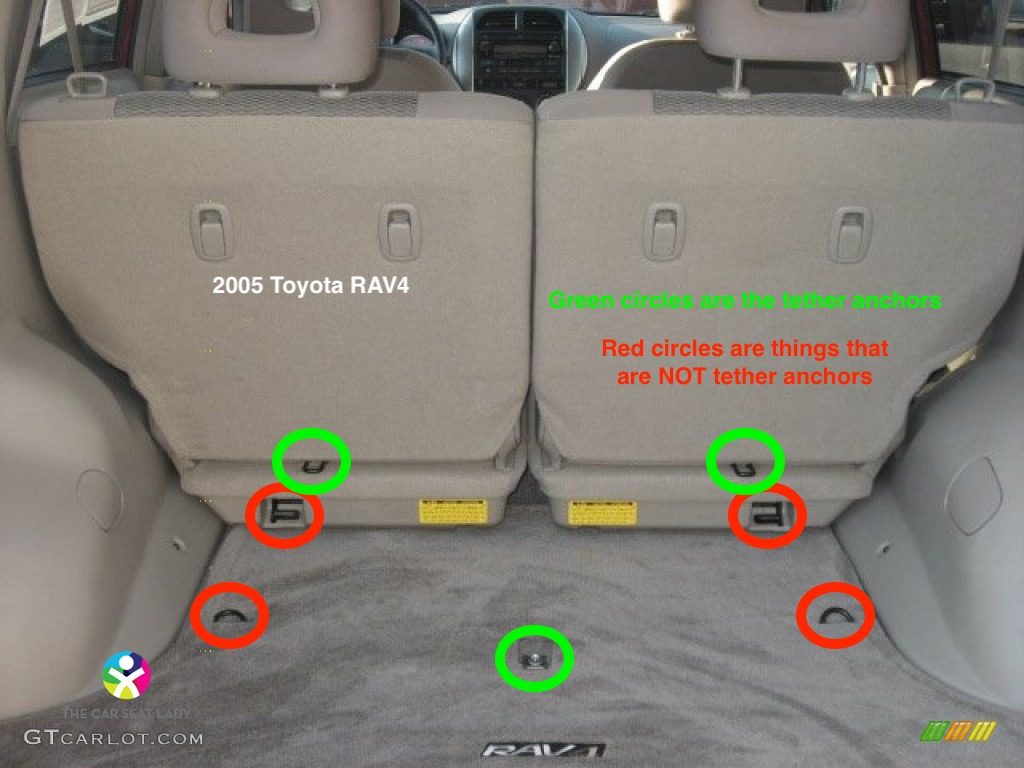 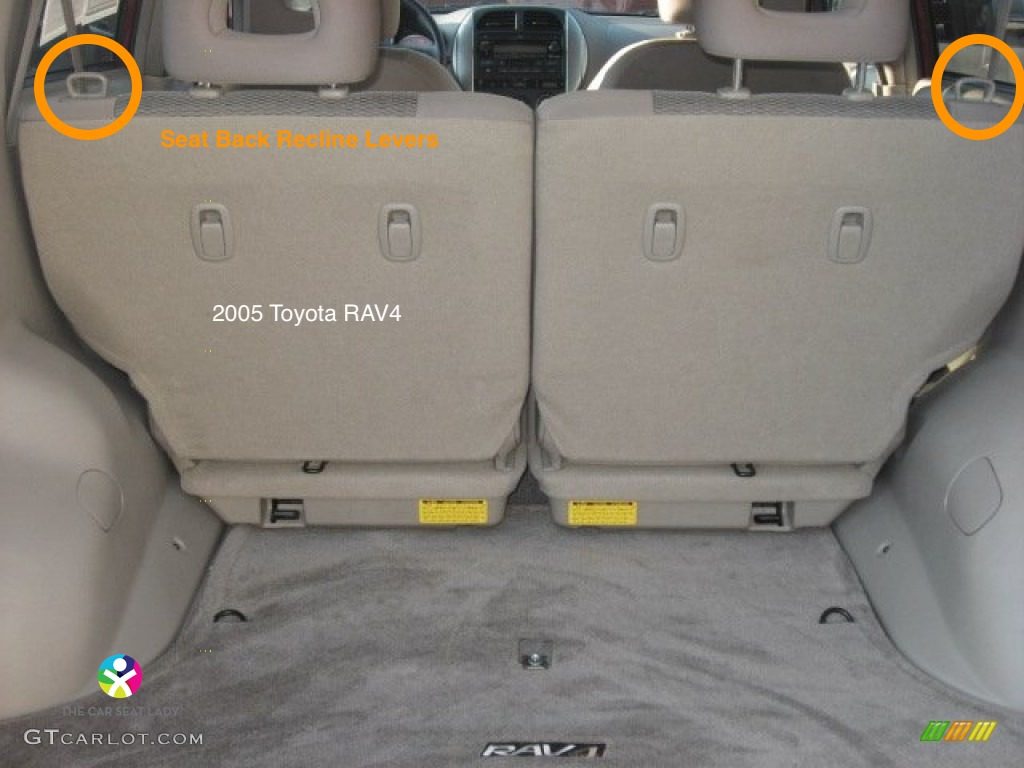 The RAV4 was first introduced in 1995. There are no tether anchors or lower anchors in this model year range, and they can not be retrofitted either.

There is only a lap belt, and no head restraint for 2C – making it not suitable for kids in boosters or adults. A rear-facing car seat can be securely installed here. Because there are no tether anchors in this vehicle, and they can not be retrofitted, we recommend keeping kids rear-facing until they are ready for a booster seat (at least age 5, at least 40 pounds, mature enough to sit properly in a seat belt for the whole trip), and then using a high back booster for as long as possible in 2D or 2P (never in 2C). See here for seats that have high rear-facing capacities. 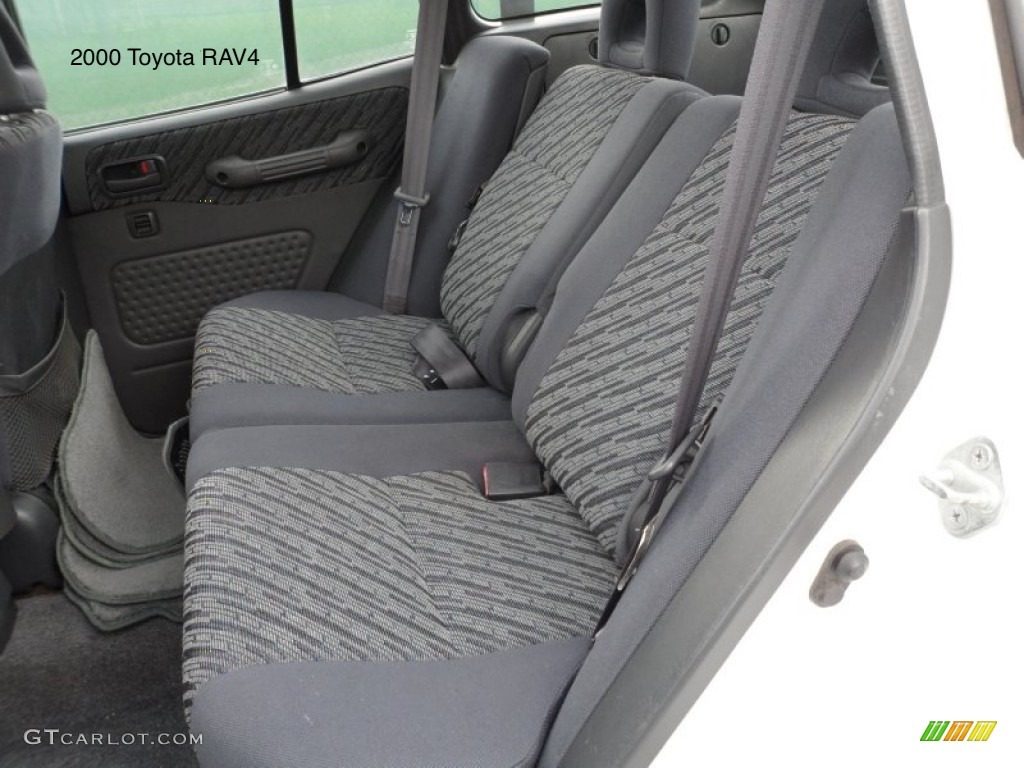 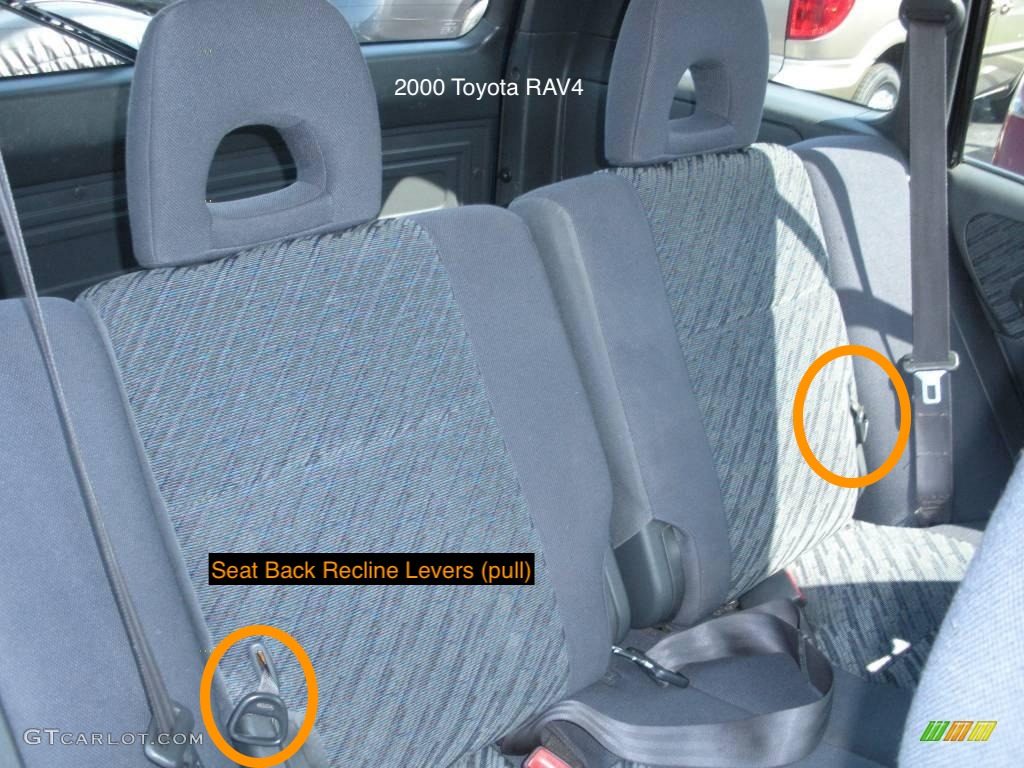