How do you make a rear facing car seat even safer? It’s not magic, it’s physics… just add one of these motion-limiting features:

Here are three very different features, yet all do the same thing – they keep the rear facing child’s head and neck safer by preventing the rear facing car seat from reclining any further during a crash.

The more upright the rear facing car seat stays during a crash, the more the child’s head, neck and back get cradled by the shell, allowing the shell to absorb more of the crash forces, putting less force into the child’s body.

An Australian-style tether wraps around the top of a rear-facing car seat and connects to the vehicle’s tether anchor (the anchor typically used for forward facing car seats). While every rear facing car seat in Australia gets tethered this way, and a growing number of seats in Europe, it’s relatively uncommon in the US. Britax seats made prior to 2015 allowed Australian style rear-facing tethering, but sadly no longer do.

Clek has brought that down-under style back to the US with their Q-Tether. The Q-Tether can be added to any Foonf or Fllo (older model or current ones), making safe even safer! Q-tether is $20 and is available for purchase on Clek’s website. It takes 3 seconds to loosen the Q-tether so it drops out of the way to get a child in and out easily, and tightens in 3 seconds with a quick pull. 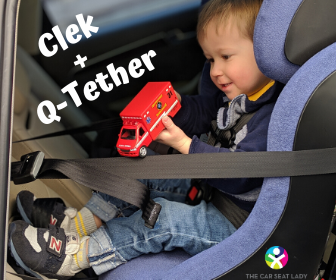 Load legs are currently found on about a dozen rear-facing-only (infant) seats. Our favorite seat with a load leg is the Clek Liing – as it also has rigid LATCH on the base, a European belt path on the carrier, harness straps that pull smoothly and do not twist (hallelujah), a great fit for small newborns and big babies with a small footprint in the vehicle. A budget friendly option is the Evenflo LiteMax DLX.

A European belt path is now found on about half of all rear-facing-only (infant) seats in the US. This feature can be found on the budget friendly Graco Snug Ride Click Connect (all models) all the way up to the splurge-worthy Clek Liing and tons of seats in between. This belt path is for installing a carrier without a base – like in a taxi or Uber.

🇸🇪Note: A few seats in the US allow for Swedish-style rear facing tethering – where the tether is connected when to the floor of the car – usually to the seat track of the front seat. Swedish style tethering eliminates the motion of the rear facing car seat towards the back of the vehicle, acting as an anti-rebound feature. This style tethering is losing favor as it can affect the airbag sensors for the front seat occupants in some vehicles. More seats are featuring anti-rebound bars to limit motion without needing a strap to connect to the front seat track. However, limiting the motion towards the front of the car – as the load leg, European belt path, and Australian style tether do – does more to reduce the risk of injury to the rear facing child than does limiting the motion towards the back of the vehicle like an anti-rebound bar does.

FTC Disclosure: Affiliate links are included in this page. No monetary compensation was provided. All opinions are those of The Car Seat Lady LLC.