For the sake of brevity, we will call these 3 seats the ClickTight Convertibles (CTC).

There are many other Britax seats with similar names – including other Marathon, Boulevard, and Advocate models as well as ClickTight combination seats called the Frontier ClickTight & Pinnacle ClickTight. This article is NOT talking about these seats.

In September 2014 the CTC arrived on the market. On 10/20/14 The Car Seat Lady notified Britax that we had seen 3 CTC seats and 2 of the 3 had a similar safety issue where the child’s lower harness straps (hip straps on the 5 point harness) were not connected to the metal anchors on the car seat’s ClickTight plate. We reached out to other child passenger safety professionals and learned that others, including Consumer Reports, were finding the same problem. We followed protocol and encouraged colleagues and parents to contact Britax AND complete a defect complaint form on NHTSA’s website.

Consumer Reports released the following video in November 2014, detailing what was known about the problem at the time, and instructing parents on how to check and fix their seats.

Scope of the Problem Widens

Initially it seemed that the problem was simply a one-time “assembly issue” – whereby in the Britax factory some of the lower harness straps were not assembled onto the ClickTight plate’s metal anchors properly – but once a parent checked and properly secured the straps to their metal anchors the problem was solved once and for all.  Back in October 2014 TheCarSeatLady met with a father and taught him how to install his toddler’s brand-new CTC rear-facing. Prior to and after installation, we carefully made sure that both lower harness straps were connected properly. On March 1, 2015 the father returned as he had a new baby on the way and wanted help installing the infant’s seat. In the intervening months, the father had reinstalled the CTC, and had done a perfect job. It was necessary to remove the CTC to make room for the new baby’s seat, and upon lifting up the ClickTight plate we were shocked to see that neither of the lower harness straps was connected to the ClickTight plate’s metal anchors (see picture below). This was even more shocking as the father had been able to buckle his daughter in the seat and get the straps – what seemed to be properly snug – on her. 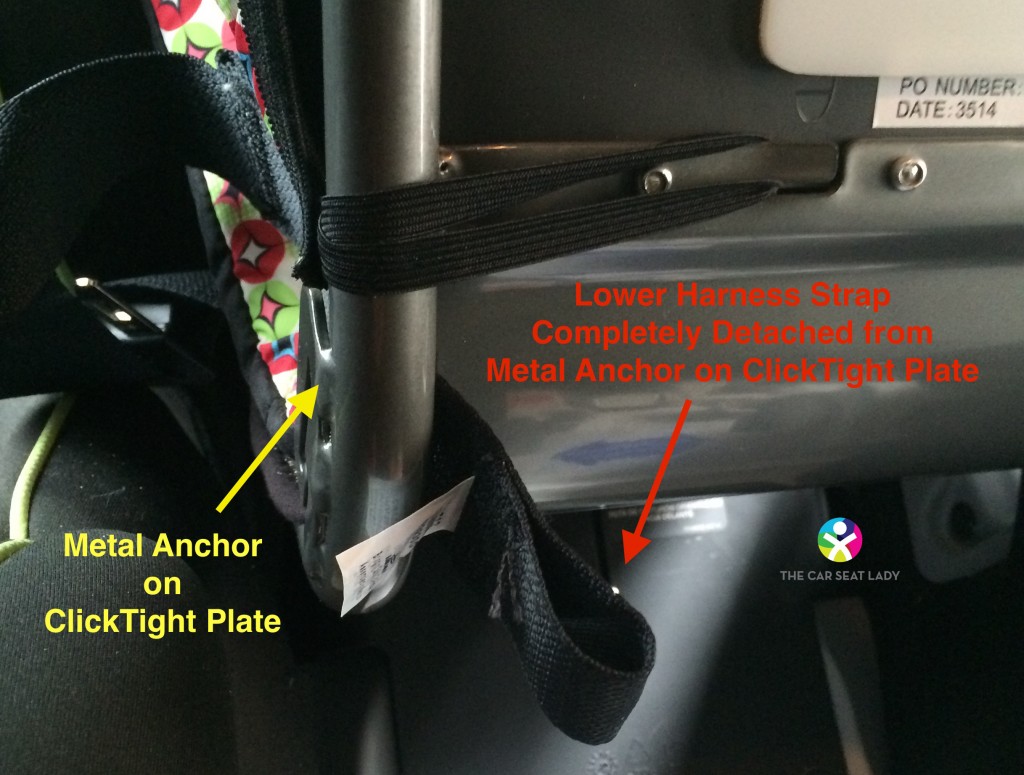 What has NHTSA & Britax done about the above issue?

Britax responded to the issue and made changes to the seat starting 11/7/14, but it would be nearly 6 months before any admission of these changes were made to consumers (see email above). Nothing was sent to TheCarSeatLady, despite us being the first to bring the issue to Britax’s attention. TheCarSeatLady has followed up with Britax and NHTSA on numerous occasions since October. Britax reiterated their position in a 4/7/15 email:

We have communicated with NHTSA and confirmed through testing that the product will perform as intended.   As you are aware, we have also sent emails to registered consumers and updated our website to include a notice to consumers and inspection instructions. http://www.britaxusa.com/learning-center/prepare-and-install-clicktight-convertible

We received two emails from Otto Matheke, Acting Director of NHTSA’s Office of Defects Investigation. We want to thank him both for his thoroughness (we asked MANY questions and he answered ALL of them) and willingness to let us share both emails publicly. It is important to note however that as of 5/31/15, there is nothing on NHTSA’s website indicating any investigation into the matter. Below is the first email TheCarSeatLady received from Otto Matheke on 4/7/15.

I will now address your specific questions:   Your first question asks why the “assembly error” in these child seats did not “qualify” for a recall.   Answer: NHTSA’s authority to compel manufacturers to perform a recall is limited to those situations where the existence of a defect poses an “unreasonable” risk to safety. Some of these seats clearly contain a defect – the outstanding issue is the nature and degree of any safety risk posed by that defect.   Britax has supplied NHTSA with test data indicating the defect does not pose a safety risk because of the inherent redundancy of the 5 point harness configuration and the performance of the system with the hip belts unattached and partially attached.  We are continuing to examine the issue and will be taking additional steps in the immediate future to further evaluate Britax’s position.   You also ask if there is a place on NHTSA’s website where I can read about what criteria qualify or don’t qualify for a recall?   Answer:  No. We do not follow set criteria in evaluating potential defect cases. Doing so is both an art and a science. As a physician, you undoubtedly understand that these two fields overlap and call for the exercise of judgement.    Where can I read NHTSA’s statement on this issue – as when I look here I find no mention of NHTSA’s investigation – http://www-odi.nhtsa.dot.gov/owners/SearchSafetyIssues   Answer: There is no statement. We have not opened a formal investigation and are continuing to examine this issue. We are not done and have no statement at this time.   Why is Britax not responsible for notifying all parents who registered their seats (not just the ones who gave their email address)? Shouldn’t Britax have to mention this on their website at least?   Answer: Although it is clear that a manufacturing defect exists in some Britax seats, neither Britax nor NHTSA have yet made a determination that this defect poses an unreasonable risk to safety. Until the Agency or Britax makes a determination that a safety-related defect exists, Britax is not obligated under the Safety Act to notify owners of a defect and the availability of a free remedy. NHTSA encouraged Britax to email known owners about the issue and the way to fix it, but cannot require the company to do more at this time.   When it says that NHTSA “confirmed the performance” of the Click Tight seats, does this mean that the seats were crash tested? Did Britax do all the testing, or did NHTSA do their own as well? If there was crash testing, was the testing done with the harness straps in the “assembly error” position – i.e. not attached to the metal anchor?   Answer: The statement that NHTSA has “confirmed the performance” of the seats at issue was apparently made by Britax without the Agency’s knowledge or consent. While Britax has shared test data with us that appears to show there is no safety risk, it does not speak for the Agency. As noted above, NHTSA’s analysis of this issue is not complete.   What about the Click Tight that I saw where after reinstallation the leg straps had both detached, but in a way that could not be detected while harnessing the child in the seat (you could only notice by uninstalling the seat and lifting up the Click Tight plate).   Answer:  Our analysis is not complete. Britax has submitted test data supporting the contention that the seats perform adequately with the condition you describe. We are evaluating this data and taking additional steps to determine if the condition creates a safety risk.   In closing, I would like to thank you for your contributions to child safety and your determination to make a difference. Please feel free to call me if you have any questions or wish to discuss the matter further. Otto Matheke  Acting Director  Office of Defects Investigation

We have reviewed the sled test data submitted by Britax and have conducted our own testing with the “side” or “hip” straps unfastened, including where both ends of the unfastened straps were hidden below the seat. We found that the seat met the existing performance requirements of FMVSS No. 213 in all configurations. While NHTSA’s position is that compliance with an applicable safety standard does not preclude a finding that a safety related defect exists, we do not currently have any evidence suggesting that the Britax seats at issue, which become three-point seats when the “hip” straps are not anchored, are unreasonably dangerous.   Otto Matheke Acting Director NHTSA Office of Defects Investigation

We do not believe the government’s recall or investigation process into potential safety defects is transparent enough to consumers or child passenger safety advocates. In a 12/4/14 email, a member of the Office of Defects Investigation stated “whenever NHTSA opens a new safety defect investigation we do make that publicly available on our safercar.gov website.” We believe what Mr. Matheke has written, but there is no evidence on NHTSA’s safercar.gov website – specifically here and here where investigations are made public – to support his statements. We believe this process needs to be overhauled to support greater ease of reporting potential defects by consumers and greater transparency at all stages in the investigation process. We also believe that when a manufacturer makes a change in response to a potential safety issue that some notification of consumers with the older design be required.

What should you do if you own a CTC?

First, understand that this is not a recall, and as such, there is no “recall repair kit” to “fix” this issue as would be required if there was a recall. Britax DID make changes to the lower harness straps’ metal anchors. While Britax initially denied making any changes, they confirmed to Consumer Reports that they “made a slight modification to the angle of the brackets for the lower harnesses to make it easier to assemble. We gained the additional benefit of improved retention of the lower harness straps.” It is most likely that this “slight modification” was made starting 11/8/14, as Britax has admitted that there was “an initial assembly issue” affecting all Marathon ClickTight, Boulevard ClickTight and Advocate ClickTight seats manufactured between August 15, 2014 and November 7, 2014.  So, here’s what to do if you own a Britax CTC:

Addendum 6/19/15: It has come to our attention that Britax customer service has been telling parents that The Car Seat Lady has apologized for this post. We have not apologized, and will not apologize. Everything above is the truth and we stand behind it.