Most families don’t know that it’s safer and also easier (really!) to use a car seat on board the flight. Here’s a thorough explanation of why you should ALWAYS bring and use your child’s car seat on the plane. 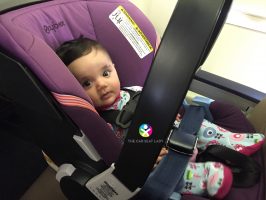 Here’s a typical scenario. You’re flying somewhere with your kids, which means you’re already bringing a stroller, a portable crib, suitcases, toys, a diaper bag, and one or more children. Many parents are overwhelmed by the sheer amount of stuff kids require and the first item to get left home is often–you guessed it!– the car seat.

But kids are vastly better protected if they use a car seat on the plane.  During take off and landing, all adults must have their seat belts fastened and all bags must be stowed securely. This is because anything not secured is liable to fly around if a problem were to occur during the takeoff or landing. Why do we exempt babies and small children from this restriction? Doesn’t your child deserve the same protection as you–or your suitcase?

What would happen to your lap child during an aborted takeoff, when you’re traveling down the runway at 120 mph and then suddenly stop? What would happen during sudden turbulence? In these situations, you will not be able to hold on to your child tightly enough to keep him safe–the G-forces are simply too strong. In these situations you are likely to experience G-forces of 10-25G, which will make everything weigh 10-25 times its usual weight, turning your baby human into a baby elephant and therefore impossible to hold onto.

Flight attendant Jan Lohr recounts a flight “when sudden and severe turbulence caused two lap children to be hospitalized. They had sustained injuries when they flew over a dozen rows and landed near a bulkhead. Garment bags in an overhead closet subsequently fell on the infants.” While working as a flight attendant, Ms. Lohr survived a plane crash caused by an engine explosion that severed all the hydraulic lines on a flight from Denver to Chicago. She recounts what happened to 22-month old Evan, a lap-child who did not survive the impact, in a statement for the NTSB Advocacy Briefing on Child Restraints on Aircraft.

If you think that a car seat won’t protect your child in a crash, think again! Some crashes are survivable. In 2007, a 3-year old was the only survivor of a horrible plane crash – rescuers found her hanging upside down in her car seat in the rubble of the aircraft with only minor injuries.

The American Academy of Pediatrics: The AAP recommends that kids ride in child safety seats on airplanes, based on studies which show preventable deaths and injuries have occurred in lap children:

“Occupant protection policies for children younger than 2 years on aircraft are inconsistent with all other national policies on safe transportation. Children younger than 2 years are not required to be restrained or secured on aircraft during takeoff, landing, and conditions of turbulence. They are permitted to be held on the lap of an adult. Preventable injuries and deaths have occurred in children younger than 2 years who were unrestrained in aircraft during survivable crashes and conditions of turbulence. The American Academy of Pediatrics recommends a mandatory federal requirement for restraint use for children on aircraft. The Academy further recommends that parents ensure that a seat is available for all children during aircraft transport and follow current recommendations for restraint use for all children. Physicians play a significant role in counseling families, advocating for public policy mandates, and encouraging technologic research that will improve protection of children in aircraft.”

FAA: The FAA has for a long time recommended that children sit in child safety seats or devices during air travel:

“Did you know that the safest place for your little one during turbulence or an emergency is in an approved child restraint system (CRS) or device, not on your lap?….FAA strongly urges parents and guardians to secure children in an appropriate restraint based on weight and size. Keeping a child in a CRS or device during the flight is the smart and right thing to do.”

“Turbulence can happen with little or no warning. And when it does, the safest place for your child is in a CRS (child restraint system), not in an adult’s lap. Your arms just aren’t capable of holding your child securely, especially when turbulence is unexpected. Keeping your child in a CRS for the duration of the flight is the smart and right thing to do so that everyone in your family arrives safely at your destination.” (see the full text)

The NTSB: recommends that children sit in child safety seats or devices during air travel.

“…adults may not be able to maintain a secure hold on a lap-held child during turbulence and survivable accidents. Preventable deaths and injuries have occurred in children under 2 who were unrestrained….For over 30 years, the NTSB has investigated aircraft accidents involving unrestrained children and has issued safety recommendations asking the FAA to require that children under 2 be in an appropriately secured child restraint in their own seat.”

Why are you not required to purchase a seat for your child under 2?

The airlines don’t require seats for children under two because they’re afraid that parents will balk at the cost of three seats and decide to travel by car or train instead. According to the airlines and the FAA, if parents decide to drive, their kids will be more at risk since car travel is statistically more dangerous than air travel.

The data used to reach this conclusion are flawed, according to the National Transportation Safety Board, which continues to push for mandatory child restraints for children under two on aircraft. (read more about the NTSB’s position)

Besides safety, using a car seat is more comfy for kids and more convenient for parents

Taking along a car seat can seem like a big hassle, but think about it carefully. Do you really want to hold your squirmy 10 month old for 5 hours? We’ve traveled with kids and car seats and wouldn’t do it any other way simply from a comfort and convenience perspective! Click here for lots of tips on traveling with a car seat on a plane.